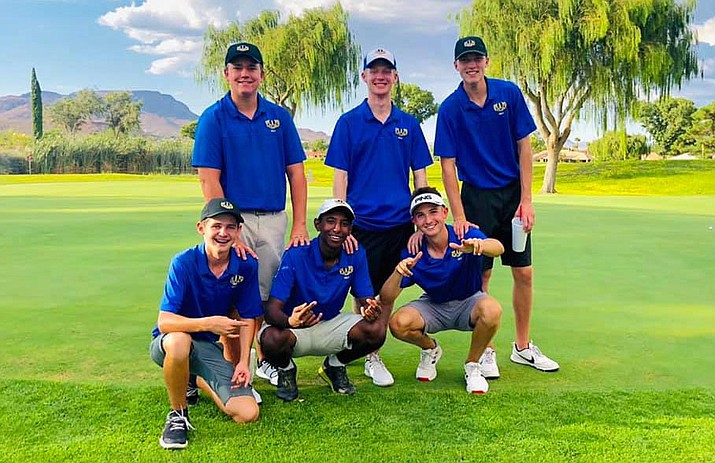 The Prescott boys golf team poses for a photo after taking first place in its match against Mohave and Flagstaff on Tuesday, Sept. 3, 2019, at Cerbat Cliffs Golf Course in Kingman. (Dan Osterloh/Courtesy)

KINGMAN — Prescott boys golf was crowned king in Kingman as the Badgers dominated Mohave and Kingman by seizing each of the top-five spots in their match at Cerbat Cliffs Golf Course on Tuesday.

Coming off a solid fourth-place finish at the Arizona High School Fall Preview at Grand Canyon University Golf Course on Saturday, the Badgers crushed the competition in their first official match of the season. Prescott finished first with a team score of 156 (+12) as all four of its top players placed first through fourth.

Junior Chance Hill led the charge for the Badgers, placing first with an even par while senior Beniam Osterloh came in second with a 38 (+2) and senior Nicholas Ruhrer and Cademon Buettner tied for third with a 41 (+5). Sophomore Brent Chambers rounded out the top five for Prescott with a 44 (+8) score while alternate Clayton Coffman tallied a 47 (+11).

Prescott’s next match — which was postponed from last week — will be on Thursday against Coconino and Flagstaff at Flagstaff Ranch Golf Course. Tee off is set for 3 p.m.