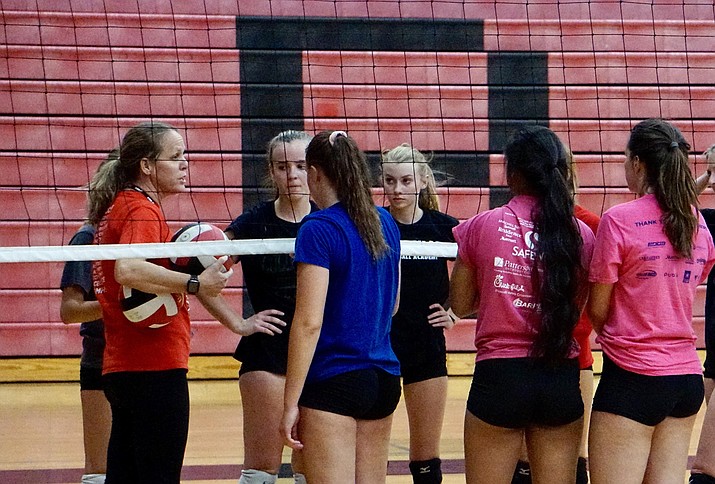 PRESCOTT VALLEY — Bradshaw Mountain volleyball’s playoff appearance last season was the first one in a long while, and it’s something that newly hired head coach Karrie Platt hopes to keep building on for the foreseeable future.

“I’m so excited to be here,” Platt said. “We’ve lived in this community for eight years and my kids come [to Bradshaw Mountain], and I’ve watched Natali [Sobczak], the prior coach, build this program and she’s put in a lot of blood and guts into this and I’m excited to take it over.”

Out of college, Platt coached the volleyball team at Mountain Valley High School down in Mesa for three years where she led the Toros to the 5A state semifinals. She then took time off to raise her children and moved to New York for a spell so that her husband could go to school.

Platt and her family eventually moved to Prescott Valley eight years ago where she’s had the opportunity to coach a few club teams here and there. When Sobczak stepped down, Platt said the timing was right to once again try her hand at coaching high school volleyball.

Fortunately for her, Platt seems to have come back at the perfect time as the Bears are coming off their best season since 2011, which was the last time they made the playoffs. In 2018, the Bears put together a solid season, going 23-7 overall and 9-3 in 4A Grand Canyon Region play, which was good enough for second place behind champions Flagstaff.

However, the Bears were swiftly bounced out the playoffs as they were swept by Deer Valley in the first round. On the bright side, returning senior Jordyn Moser believes last season’s run was the start of something special and also said the team has been working hard over the offseason to sharpen their skills and chemistry.

“The offseason started out really good. I think we’ve been all in the gym, at least most of us, and try to be here as much as possible working together so we can start as soon as we can to create that bond for the season,” Moser said.

“We got girls that are committed, dedicated and work horses and they come out and they get the job done … We did for sure lose some good players, some good leadership from last year but we got girls that are filling those roles just fine,” Platt said. “Last year, the team had a lot of height. We don’t have height this year, so we might be more defensive.”

Bradshaw Mountain will have its home opener on Sept. 5 against 4A Skyline powerhouse St. Mary’s.

“I think as a team, we obviously want to go to state again and that’s been our big goal ever since summer started,” Moser said. “It’s going to take focus, it’s going to take a lot of teamwork and I think we all just need to work together because we have a common goal and we all know that, so it really helps with our focus and where we are heading.”

2018 Playoffs: Lost to Deer Valley 3-0 in the first round of 4A state volleyball championships.