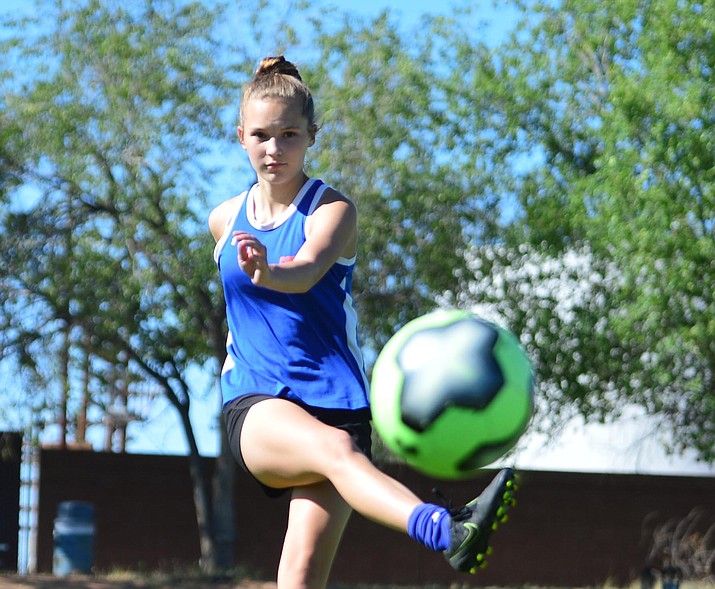 CHINO VALLEY — Despite it having been only three years since Chino Valley girls soccer won a state title, that’s already too long for head coach Allen Foster and the Cougars who are gearing up once again for their 2019 fall season.

The Chino Valley girls soccer team has been perennial superpower not only in the East Region, but in the entire 12-team 2A Conference and it seems to be no different this year. Under the tutelage of Foster, the Cougars have been a playoff regular and last claimed a state title in 2016 when they defeated Round Valley 1-0.

However, the Cougars have suffered heartbreakers in back-to-back season by falling short to Northland Prep in the state championship game the last two years. Coming up just short of a title is something that takes time to recover from, but Foster said his team is hungrier than ever and will use those losses as motivation going forward.

In terms of personnel, the Cougars will be without last season’s leading scorer and Player of the Year Lauren Foster, who just so happens to be Foster’s daughter and is now playing for Embry-Riddle.

It’s quite the loss but Foster believes the team has enough talented pieces to fill that void by committee.

“We lost one offensive player who was Player of the Year for the state. So that’s a big loss but we got two young girls that are going to be sophomores this year that were huge impact players for us last and will step up and fill that gap,” Foster said. “It’s going to take a couple of them to do it but we’ll try to replace Lauren with two players.”

Fortunately for the Cougars, the team will have a slew of talented and young players to make up for any holes on top. These players include sophomore Madison Foster, sophomore Sabrina Lopez and junior Julz Elsea, who netted 29, 9, and 8 goals last season, respectively.

On the defensive end, the Cougars’ backline took another hit when by losing Serena Reed, who was a four-year starter on the team. However, Foster will have the luxury of relying on his stalwart goalkeeper in senior Kacey Matthews, who he’s touted as the best keeper in the state.

“I think we’re ready for the season,” said Matthews, who also looks to be a leader for the Cougar defense this year. “We have a lot of freshman coming up and for myself, I think I’ve improved over the last four years and it’s going to be my last year here so I think it’s going to be a good years. I also just got some new keeper gloves.”

Senior Ashley McGuffey will fortify the backline as Foster said he aims to transition her to a full-time defensive role instead of having her in the midfield.

Due to McGuffey’s offensive prowess, this move could potentially bolster Foster’s favored style of play, which is a fast-paced, counterattacking offense that could play out of the back very quickly and catch the opposing defense off-guard.

“A lot of past years, it’s just been like certain spots carrying our team but I feel this year we have the skill level more spread out evenly and we’re just more well-rounded,” said senior defender Carolina Gomez.

The Cougars will have a 12-game schedule but will first travel to Nevada for a tournament in order to see different opponents and test themselves outside of their comfort zone.

The team will then return to Arizona for a three-game nonconference road trip before their home opener against Show Low on Sept. 13.

2A Central action will then open up on the road with a rivalry game against Camp Verde on Sept. 17 while last year’s state championship game rematch with Northland Prep lands on Sept. 26.

As the Cougars learned last year, a win over Northland Prep in the regular season does not guarantee a win over them in the playoffs. However, the Cougars can at least say they now know what it will take to put them over the top.

“Every one of us wants another state title so we’re going to work towards that and do the best we can to accomplishing that,” Matthews said. “We can beat any other team in the state. Northland Prep is just a good team … [It’s just going to take] practicing, hard work, team work, family and just everyone getting along and working together as a team. We all have to go through the season with a winning attitude.”