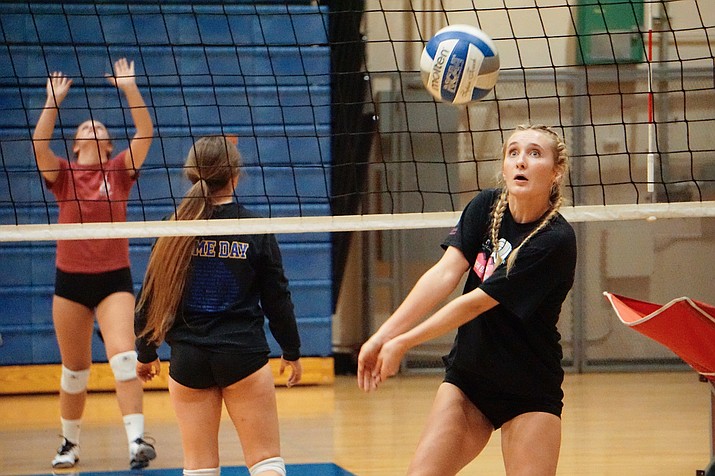 Prescott senior Kendall Gisi (right) bumps the ball back to her teammate during a drill at the volleyball team’s practice on Thursday, Aug. 29, 2019, in Prescott. (Aaron Valdez/Courier)

PRESCOTT — For nearly this entire decade, it’s been the same old song and dance for Prescott volleyball of consistently contending for a Grand Canyon title but then fizzling out in the early rounds of state. However, a fresh start is underway as newly hired head coach Courtney Adams has high hopes the Badgers could make a big leap this upcoming season.

“I am so excited. I have been counting down the days to our first game and I can’t wait,” Adams said. “The girls have been excited too and we are just happy to see how the season is going to unfold and go from there.”

Adams, 23, is fresh out of college as she graduated from Oklahoma Panhandle State University in May where she was a four-year starter on the Aggies volleyball team.

Prescott announced the California native’s hiring in June and since then, Adams has spent most of the summer getting to know some players and evaluating their talent level. For the past couple weeks, the Badgers have had practices Monday through Friday and even had a team-bonding event on Saturday, Aug. 24

“I see a lot of talent in a lot of different places, which is great,” Adams said. “We have a lot to work with and I think there is a couple spots where we just have raw talent and we just need to rough out some edges and we’ll be just fine.”

Ever since Prescott was aligned into the 4A Grand Canyon region, they’ve proved themselves a perennial contender for the title but it seems Flagstaff is always one step ahead. The last time the Badgers won the region title was when they were co-champions with Flagstaff in 2016.

As far as the state playoffs go, 2016 seemed to be Prescott’s glory year as the team made it to the semifinals but ended up falling short to eventual champion Salpointe Catholic. The 2017 and 2018 seasons saw nearly identical results in that the Badgers finished third in the Grand Canyon region and then were bounced out in the first round of state both times.

Senior Kendall Gisi, who is a key returner, said her goal for the team is to definitely return to state and also believes the Badgers have the tools to make a deep run.

“I think the goal is to definitely make state again and this year go further,” said Gisi, who also plans to assume a leadership role on the team being that she’s one of the oldest. “Our strong points are definitely on the outside and probably passing this year, even though we do have strong middles as well.”

Prescott will need to find ways to replace the production of Danielle Dreher, Sabina Dimaano-Simmons and Tessandra Rothfuss, who were all seniors last year and recorded 121 kills, 198 digs and 242 assists, respectively. Along with Gisi, key returners to help fill that void will be junior outside hitter Kate Radavich, senior outside hitter Samantha Spengler and junior setter Ellie Fenderson.

This season will feature a 17-game schedule beginning with a road game against a gritty Youngker team on Tuesday. Prescott will then play in two more non-region games including a home opener against Shadow Mountain on Sept. 10 at 6 p.m. before diving into Grand Canyon action with a contest against rivals Bradshaw Mountain on the road. The Bears placed right above the Badgers in the region standings both times over the last two years.

“It’s going to take a lot of hard work from all us,” Radavich said. “We have been playing together for a couple years now and we’re all different, but once we get the team chemistry down, we’re going to really do a great job on the court.”