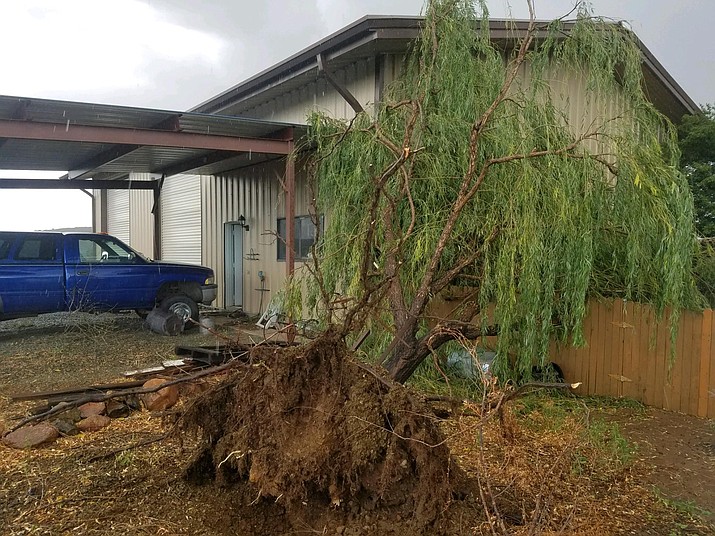 Storms causing trees to fall or be uprooted has been common lately - this one happened Wednesday, Aug. 28, 2019, when a willow tree fell over in Dewey. (Doyle Wiste/Courtesy)

At the height of the Sunday evening storm, power was knocked out for a little over 10,000 APS customers statewide, mostly because of intense winds and lightning, said Jill Hanks, communications consultant for APS Media Relations.

“We thank our customers for their patience as our crews worked throughout the night in many parts of the state to restore power just as quickly and safely as they could,” she said Monday.

The first power disruption was due to power lines down in Prescott Valley, shortly after 7 p.m. APS restored power at 1:07 a.m. — roughly six hours later for the 924 customers who were affected. The outage was in the area of Long Look Drive to Horizon Lane and Pine View Drive to Loos Road.

The second incident was a result of the storm causing power to fail for 653 APS customers in Skull Valley at about 7:20 p.m. APS was able to restore power within 10 minutes, Hanks reported.

Monday morning was the third storm-related outage, caused by a tree falling into a power line in Prescott. At about 8:19 a.m., 1,964 APS customers lost power in the area of Creekside Circle to Vulture Bend Drive and Copper Basin Road to Granite Street. Power was restored by 9:08 a.m., less than an hour after it went out.

There were no reports of power failures elsewhere in the Quad Cities. 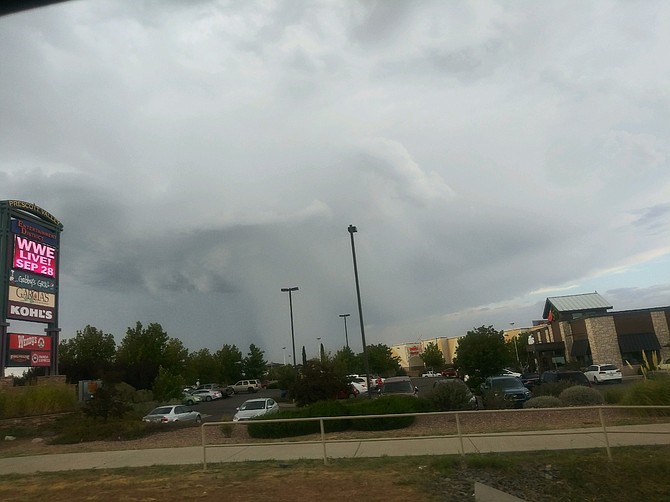 Stephanie Balictar shared this photo of "round shape cloud with funnel pouring out the center," near the Entertainment District of Prescott Valley. She took the photograph on Sunday, Sept. 1, 2019. (Courtesy)

If APS customers haven’t already, “we encourage them to download the free APS mobile app and sign up for outage alerts via the app or www.aps.com/outage. We also recommend having a storm kit ready to go,” Hanks said.

She suggests to include in the kit items such as non-perishable food, water, a first-aid kit, a battery-operated radio, flashlights, extra batteries and a phone charger for your car — so you can keep your phone charged up.

Editor's Note - this article has been updated to note that the second power outage was in Skull Valley.