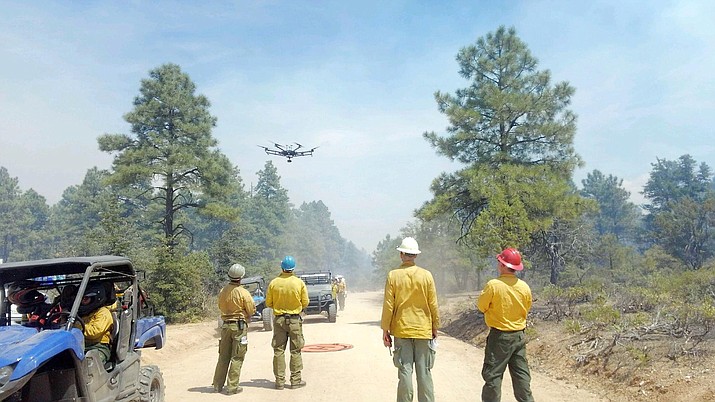 Fire crews operate a drone this past week over the Sheridan Fire, which is about 23 miles northwest of Prescott. The drone allows for monitoring and evaluation of the fire's progress. (Prescott National Forest, inciweb/Courtesy)

The Prescott National Forest stated Sunday morning, Sept. 1, smoke from the Sheridan Fire – which remains zero-percent contained – will continue to dissipate as slightly lower temperatures and a return of higher humidity is expected to slow fire growth.

The Sheridan Fire, shown in red, is west of Williamson Valley Road and north and south of Camp Wood Road. It is about 23 miles northwest of Prescott. (Prescott National Forest/Courtesy)

The overall objective of resource benefits to enhance vegetation and improved wildlife habitat continues. The fire, which was started from a lightning strike on Aug. 5, continues to be allowed to fulfill its natural role.

While it is technically zero-percent contained, fire managers and crews continue to work the fire and monitor it to allow the fire to act as a controlled burn. There are no homes or structures threatened, the Forest Service said.

The Sheridan Fire is burning on the Chino Valley Ranger District in Pinyon-Juniper, grass and brush. Approximately 202 personnel are on the fire including six engines, three water tenders, three crews, two helicopters, four masticators, and one dozer.

Visible smoke may continue to dissipate today due to slightly lower temperatures and an increase in humidity slowing the growth of the fire. Incident-specific smoke monitors are in place near Paulden to monitor area impacts. In the unlikely event that smoke conditions increase it is recommended that those more sensitive to smoke stay indoors with windows and doors closed, and bring pets inside.