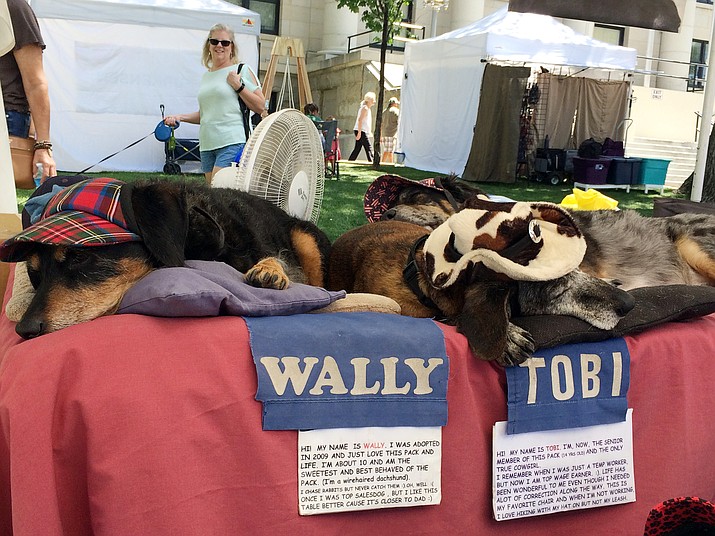 “Wally” and “Tobi,” in the foreground, are models at the Donn Moseley booth, at the Faire on the Square Sunday, Sept. 1, 2019. The plaza event concludes today. (Jason Wheeler/Courier)

Labor Day — the holiday considered to be the end of the summer season.

Those who have yet to wander into downtown Prescott over the holiday weekend may want to end their summer season by venturing onto the courthouse plaza Monday for the final day of the Faire on the Square. 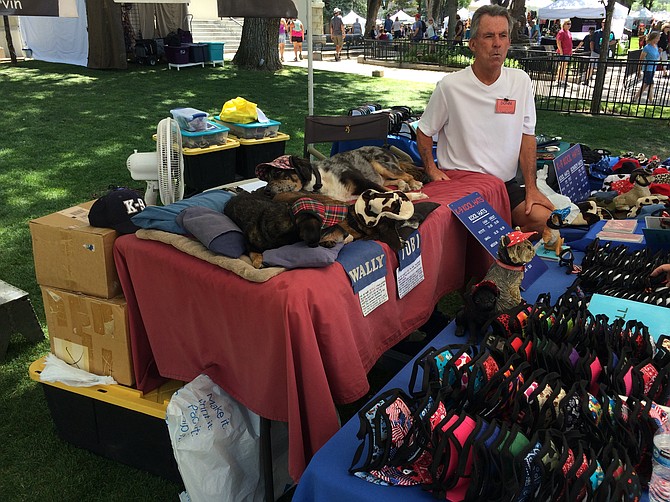 The show has something for everyone — even dogs — with Donn Moseley of K9 Kool Hats present, a venture he’s been doing since 1988. The idea came when he lived in The Valley, he said.

“When I was out in the sun and I found some shade, I’d sit there. So would the dog but when I got up to leave, he didn’t want to leave,” he said. “So the thought process started, ‘well why would they? Why wouldn’t they prefer shade just like we do?’ and the idea of the hats was borne out of that.”

Moseley said he attributes to knowing what appeals after making the hats for so long. He also goes for dog-related patterns, which fabric producers have also started offering. He has two styles — the “kool hat” and the “K9 Kowboy Hat.”

“I did the cowboy hat because it does shade,” he said. “It’s very Arizonan and by employing the same design as far as how it fits, I can make it comfortably.” 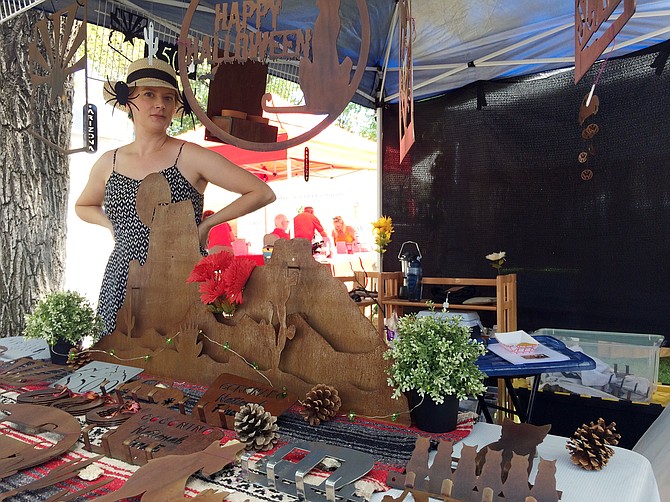 Sarah Hauan and some of her custom metal artwork at Faire on the Square Sunday, Sept. 1, 2019. The event continues Monday. (Jason Wheeler/Courier)

Also at Faire on the Square on Sunday was Benchmark Metalcraft, featuring the custom metalwork of Trevor and Sarah Hauan, an offshoot of their primary business. Though Trevor Hauan has been making custom metal creations for about 15 years, Sarah Hauan said she started doing it a couple years ago.

For ideas on how to craft the metal, Sarah Hauan said she usually takes what she thinks is cool and fun and then figures out unique ways of presenting those with the metal. She’ll also get a lot of ideas from interacting with people at the events they go to, she said.

“So just talking to people they’ll ask ‘hey do you have this?’ or “you know what would look cool would be that’ and we’ll go back and forth,” she said. “I’ll usually come out with two or three ideas each fair.”

Sculptor Rob Cobasky of Art Studio 918 had his monster sculptures on site — which are clay over wire on a wooden base. He’s been sculpting on and off since he was in high school, but has been going strong sculpting every day for the past decade, he said.

Ideas for his work come from life, he said, adding that he tries to think of scary things and what scared him as a kid. He takes his inspiration and tries to put it into a figure in motion and tell a story through movement of anatomy, he said.

With whatever he does, Cobasky said he enjoys inspiring little kids and seeing the joy and smiles he brings them. He will usually pick a kid out and give him one of his pieces, he said.