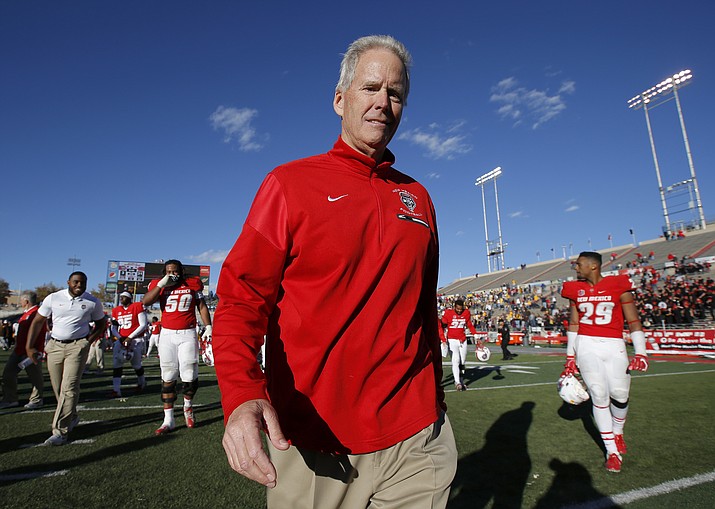 In this Nov. 24, 2018, file photo, New Mexico coach Bob Davie walks off the field after the team's NCAA college football game against Wyoming in Albuquerque, N.M. New Mexico says Davie was taken to the hospital after what it called “a serious medical incident,” following the team’s he team’s game Saturday night, Aug. 31, against Sam Houston State. Athletic director Eddie Nunez released a statement after the Lobos won 39-31 at home in Albuquerque, New Mexico. Nunez said the university will release more information as it becomes available. (Andres Leighton/AP, File)

The school released a statement from the Davie family, saying the 64-year-old coach was “doing well” and surrounded by family.

That came about an hour after athletic director Eddie Nunez made the announcement that Davie had been taken to the hospital after the Lobos won 39-31 at home.

According to the Albuquerque Journal, the 64-year-old Davie several times during the game could be seen with his hands on his midsection and chest. At one point, the newspaper reporter, Davie kneeled down during the action.

Davie’s wife, Joanne Davie, was seen in the ambulance’s front seat as it left for nearby University of New Mexico Hospital.

“Coach Davie is doing well and recovering, he is surrounded by family and your continued thoughts, prayers, and privacy are greatly appreciated during this time,” the family said.

Davie is a former Notre Dame coach who is in his eighth season leading the New Mexico program. The Pennsylvania native spent 10 years as an ESPN broadcaster before returning to the sidelines at New Mexico in 2012. He led the Lobos to a 9-4 record in 2016, but that’s been followed by back to back 3-9 seasons.

He went 35-25 in five seasons as head coach at Notre Dame, where he had served as defensive coordinator. He led the Fighting Irish to three bowl games and its first BCS postseason game, the 2001 Fiesta Bowl. Davie also was the first coach to lead Notre Dame to a bowl game in his first season.

Clemson coach on injured WR: ‘Anything is possible’

Rodgers is a 5-foot-10, 210-pound junior from Knoxville, Tennessee, who tore his ACL during spring practice. Rodgers had an operation and was expected to miss much of the season as he recovered. But Swinney said Rodgers is “well ahead of schedule” in his recovery and could see the field against the Aggies this week.

Rodgers, the son former Tennessee national championship quarterback Tee Martin, had 55 catches for 575 yards and four touchdowns last season. Rodgers went through pregame warmups with the Tigers before their 52-14 win over Georgia Tech, but did not play.