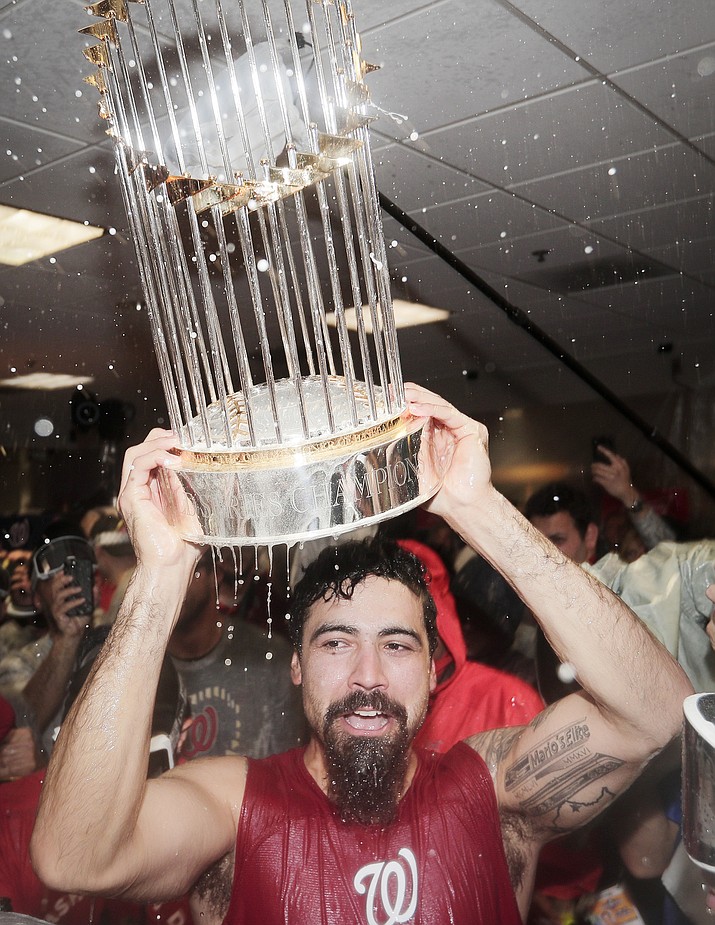 Washington Nationals third baseman Anthony Rendon celebrates with the trophy in the locker room after Game 7 of the baseball World Series against the Houston Astros Wednesday, Oct. 30, 2019, in Houston. The Nationals won 6-2 to win the series. (David J. Phillip/AP)

Houston pitcher Gerrit Cole also went free after warming up in the bullpen but never getting into the season finale.

And Nationals pitcher Stephen Strasburg, the World Series MVP, could be joining them in the next few days. He has the right to opt out of his contract, which has $100 million over four years remaining.

Baseball's business season starts shortly after the final out.

"I think it's hard to kind of fast-forward," Astros manager AJ Hinch said. "Seasons end really fast. I don't care if you get all the way to the seventh game of the World Series. It's all of a sudden — boom! — it's over."

Cole, a 29-year-old right-hander who went 20-5 this year, is expected to get a record contract for a pitcher, topping David Price's $217 million, seven-year deal with Boston before the 2016 season and Justin Verlander's $31.33 million average salary under a three-year deal with the Astros that started in 2019.

"Before I became an Astro I didn't know much about Houston, but after just two years you have made it feel like home," he wrote. "This is a relationship between a team and ... fans like no other that I know."

Strasburg, a 31-year-old right-hander, just finished the third season of a $175 million deal and at 18-6 also is coming off his best season. Rendon led the major leagues with 126 RBIs while hitting .319 with 34 homers.

A total of 131 players became free agents Thursday, and 53 more potentially are eligible pending decisions on team, player and mutual options during the next few days. 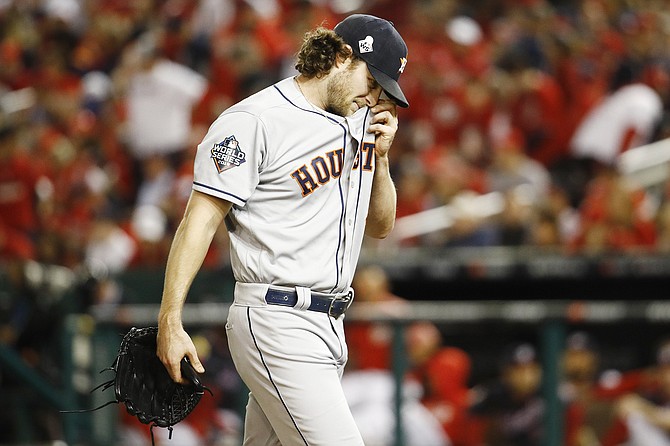 Houston Astros starting pitcher Gerrit Cole walks to the dugout after the third inning of Game 5 of the baseball World Series against the Washington Nationals Sunday, Oct. 27, 2019, in Washington. (Patrick Semansky/AP)

Yankees closer Aroldis Chapman and Boston slugger J.D. Martinez also have the right to opt out, and catcher Yasmani Grandal has a mutual option with Milwaukee.

Teams must decide by Monday whether to make $17.8 million qualifying offers to their former players who became free agents, Players are eligible for the offer if they were on the roster for the season and never received a qualifying offer before. The price dropped for the first time, by $100,000, following a second straight slow offseason for roster moves.

Edwin Encarnación's $25 million option was declined by the Yankees, triggering a $5 million buyout.

Arizona turned down a $6 million option on infielder Wilmer Flores, who gets a $500,000 buyout.

Seattle declined Wade LeBlanc's $5.5 million option and the left-hander will receive a $450,000 buyout.

Versatile Oakland reliever Yusmeiro Petit had his $5.5 million contract option for the 2020 season exercised by the Athletics, who declined their half of a $5.75 million mutual option on left-handed pitcher Jake Diekman, who gets a $500,000 buyout.