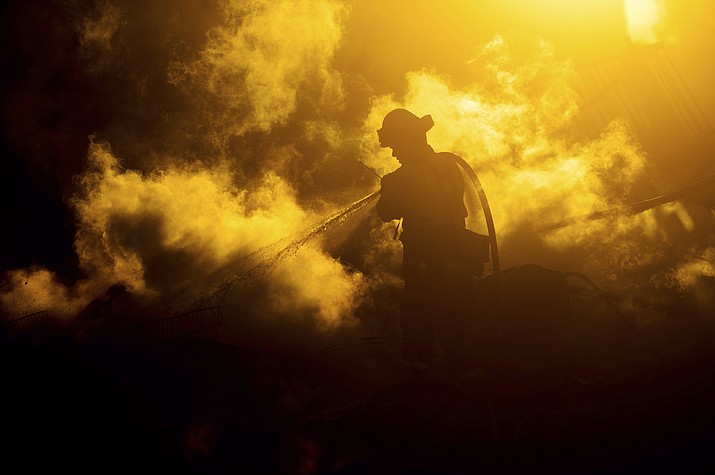 The hot car ignited dry grass in a field in the city of Jurupa Valley east of Los Angeles and strong winds that have menaced the region quickly spread the flames, burning homes and forcing residents to flee.

The frightening scenario was among the latest to erupt as exceptionally dry conditions and vicious gusts have contributed to destructive fires that forced tens of thousands of evacuations across the state while other Californians endured dayslong deliberate power outages aimed at preventing electric lines from sparking fires.

Several blazes broke out in the heavily populated inland region east of Los Angeles as the strong, seasonal Santa Ana winds continued to gust up to 60 mph (96 kph) were predicted to last until the evening before they fade away.

Riverside police were chasing suspected car thieves after midnight when the driver tried to shake them by plowing through fields and lots, Riverside Police Officer Ryan Railsback said. The damaged vehicle pulled to a stop in a field in Jurupa Valley, where the driver and passenger bolted.

The two men, both wanted on outstanding warrants, were caught as heat from the vehicle caused grasses to combust. Authorities plan to charge them with arson.

"We put that burden on the crooks," Railsback said, explaining the criminal charge. "They're the ones leading this chase."

The fire came as another broke out in neighboring San Bernardino County and the day after several other blazes forced evacuations in the region, including one that circled the Ronald Reagan Presidential Library in Simi Valley and another in Jurupa Valley that forced the evacuation of two mobile home parks and a psychiatric nursing care facility.

Elderly patients wearing breathing masks and wrapped in blankets were taken out of the Riverside Heights Healthcare Center in wheelchairs and gurneys as smoke swirled overhead. The blaze grew to 200 acres (80 hectares) in size before it was stopped.

"There was one moment when I could see nothing but dark smoke and I was like, 'We're going to die,'" said Qiana McCracken, assistant director of nursing.

California has been under a fire siege for several weeks as strong, dry winds out of the desert have fanned flames at both ends of the state and prompted widespread power outages to prevent electric lines from sparking infernos.

Electrical equipment has caused some of California's worst wildfires, including last year's fire that destroyed the town of Paradise and killed 85 people.

More than 350,000 Californians statewide remained without power as part of an effort by utility companies to prevent trees and vegetation from blowing into powerlines and causing fires.

The waves of dayslong outages have been angrily condemned by state officials and consumers.

In the Northern California city of Novato, at least 20 seniors with wheelchairs and walkers were essentially trapped in the dark in a low-income apartment complex during a two-day power shut-off.

"As long as they remain the best tool that we have to keep people safe, and our communities safe, they're the tool we will use," he said.

PG&E equipment that wasn't de-energized may have ignited a massive blaze in Sonoma County wine country that has destroyed 141 homes.

Firefighters reported making significant progress as high winds in that area eased Wednesday and the fire was 60% contained.

Electrical equipment may have also ignited the fire that started early Wednesday in Simi Valley, west of Los Angeles, which prompted evacuation orders for about 30,000 people.

The cause of that fire was not yet determined, but Southern California Edison filed a report required by state regulators to say it began near its power lines. SoCal Edison had not cut power in the area at the time this fire started.

As winds died down in Northern California, the utilities were inspecting power lines and working to restore power following a fire that forced the evacuation of 180,000 but is now mostly contained. Many children fretted as the wildfires threw their trick-or-treating plans into disarray.

Some families who live in and around wine country north of San Francisco have no neighborhood to bring their kids to collect candy because they're coming home to destruction, are still under evacuation orders or face the ingering power outages.

The Santa Ana winds that blow in fall and winter in Southern California and have fanned the region's most destructive wildfires prompted quickly spread flames into the northern neighborhoods of the city of San Bernardino.

Six homes and two outbuildings were destroyed or damaged in the 200-acre (80-hectare) fire that forced about 1,300 people to evacuate, San Bernardino County Fire Department Fire Chief Don Trapp. The cause was under investigation.

Weary firefighters may have some relief on the horizon as the vicious winds were expected to die around sunset. Forecasters do not expect a return of the Santa Anas next week.

"Once we get past that, all bets are off," weather service meteorologist Kristen Stewart said.