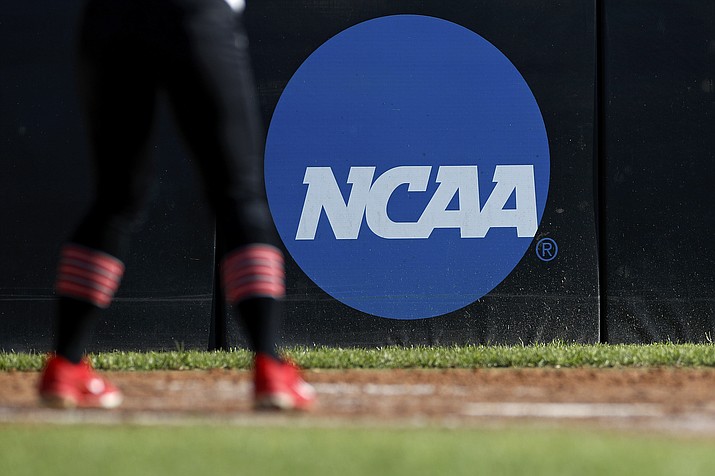 A detail view of the NCAA logo is seen as a Lamar University softball player's cleats are seen in the batter's box during an Northwestern State University at Lamar University NCAA softball game on Friday, April 19, 2019 in Beaumont, Texas. (Aaron M. Sprecher/AP)

NEW YORK — The NCAA is poised to take a significant step toward allowing college athletes to earn money off the fame they have gained by playing sports.

The Board of Governors will be briefed Tuesday by administrators who have been examining whether it would be feasible to allow athletes to profit from their names, images and likenesses while still preserving NCAA amateurism rules that are the bedrock of its existence. The move comes as the nation's largest governing body for college athletics faces increasing pressure from lawmakers across the country intent on following California's lead by dismantling compensation prohibitions that currently apply to more than 450,000 NCAA athletes.

Ohio State athletic director Gene Smith and Big East Conference Commissioner Val Ackerman, the leaders of the NCAA's name, image and likenesses working group, will present a progress report to the board at Emory University in Atlanta. It will be a key early step in a process that could take months or even years to work its way through the NCAA various layers.

"I don't expect a report saying that we're going to stay exactly like we are. I don't think we're going to get a status quo report," Atlantic 10 Conference Commissioner Bernadette McGlade said last week. She said she expected it to be the first of many steps, "certainly not a final report."

NCAA rules have long barred players from hiring agents and the association has steadfastly refused to allow players to be paid by their schools, with some exceptions. The California law would prevent athletes from losing their scholarships or being kicked off their teams for signing endorsement deals. The measure doesn't take effect until 2023, leaving time for the NCAA to take its own steps even though other states are considering measures that could take effect even earlier.

A possible place for the NCAA to start is allowing athletes to make money from non-athletic business opportunities, which is currently prohibited. McGlade said the NCAA has been approving waivers at a high rate to allow athletes to earn money if they, for example, develop a product or write a book. In a notable recent case, the NCAA provided a waiver to former Notre Dame basketball star Arike Ogunbowale so she could compete on the television show "Dancing With the Stars."

Still, the NCAA would like to draw a line between allowing athletes access to money-making opportunities that have well-defined market value and those where payments could be arbitrary and used in lieu of improper recruiting inducements, a person who has been briefed on the work done by Smith and Ackerman's group told The Associated Press. The person spoke only on condition of anonymity because the working group is not making its work public.

Such a stance would mean prohibiting an athlete from cutting a deal with a local business to appear in a commercial, for example, but letting athletes take advantage of opportunities to monetize their social media followings.

McGlade, in her 12th year as A-10 commissioner after 10 years with the Atlantic Coast Conference, said she is frustrated college sports is facing legislative pressure on an issue that has been hanging over the NCAA for years. Finding a solution that satisfies more than 300 schools competing in Division I is a challenge.

"And I don't think that it's possible to have state-by-state legislation or laws," she said. "But I also believe strongly in that the model should not move so far to the point that there is a 'pay-for-play, employee-employer relationship' with student athletes."