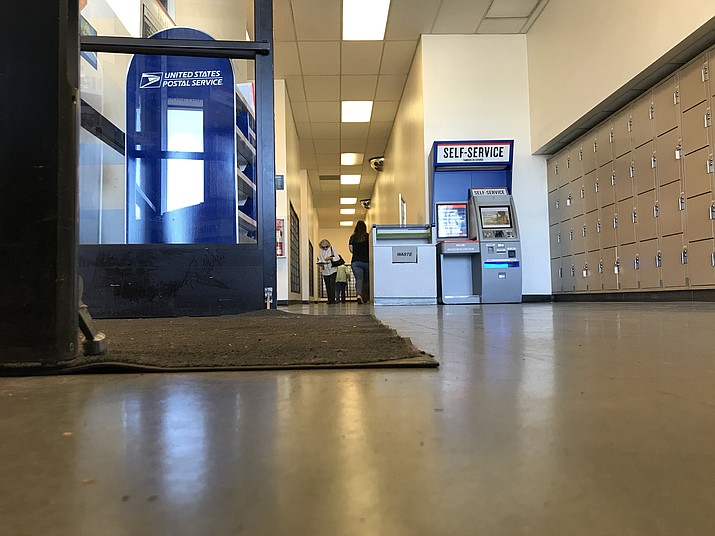 Mayor Kell Palguta said Oct. 10, 2019, that he wants to relocate the main branch of the Prescott Valley Post Office, seen here at 8307 E. Highway 69 Suite 1, to a more centralized site in the near future. (Tribune photo)

Could Prescott Valley really be getting a new post office in the near future?

In the past, the feds consistently shot down the town’s proposals. However, with Sen. Kyrsten Sinema lending her support to the cause late this past week, it might gain traction.

• Build or lease a permanent complex “in an area with increased visibility, functionality and effectiveness in reaching the broadest spectrum of residents”; and

• Find “an appropriate location that is more centrally located” with the town’s help.

On Oct. 25, Sinema responded in a news release, urging the U.S. Postal Service to review and determine if Prescott Valley needs a new branch.

Sinema wrote a letter on Oct. 25 to Postmaster General Megan J. Brennan in Washington, D.C., requesting that if the Postal Service determines a need for a new post office here, “I hope you will work with the community to develop a new facility as soon as possible.” (To read the full text of Sinema’s letter, visit: https://bit.ly/31SVF5S.)

The Prescott Valley Post Office’s main branch has been on Highway 69 since 1985. Since then, Prescott Valley’s population has grown from less than 6,000 people to about 50,000.

At least twice in recent memory, in 1981 and 2007, Prescott Valley has petitioned the Postal Service to address the issue of a new post office, the resolution adds, and has offered help to build a new branch.

Council didn’t set a specific timetable Oct. 24, but made it clear that the small main branch and its accompanying annex at 6545 E. Second St., which was built in 1998 to handle only packages, are no longer tenable for Prescott Valley.

“We are dramatically underserved by the Postal Service,” said Town Manager Larry Tarkowski, adding that Prescott Valley has tried several times through the years to acquire a bigger, more centralized post office in town. “We need a facility where citizens can find adequate parking and one where there are more service windows.”

To replace the post office on Highway 69, which shares the same complex with Prescott Valley Print Facility, Prescott News Network, the Prescott Valley Tribune, among other offices, the town will likely need support from Rep. Paul Gosar and Sens. Sinema and Martha McSally.

A new post office ultimately requires approval from the feds and an act of Congress.

“None of our past efforts have had the juice at the federal level,” Tarkowski added. “With the inadequacies of the service in Prescott Valley, hopefully we’ll have enough juice to prevail [this time].”

Mayor Kell Palguta has been spearheading the town’s efforts, and he’s committed himself to the fight. “Congressman Gosar and Senator Sinema have verbally committed to get Prescott Valley looked at [as a potential site for a new post office],” Palguta said Oct. 24. “We’ve got to at least try.”

Council approved spending $500,000 from the Highway User Revenue Fund (HURF) to help the town complete more of its pre-chip street maintenance work on the streets in the “original north core area” of Prescott Valley.

Pre-chipping involves laying down more asphalt on streets that have cracks and erosion on the sides of them, months ahead of going back over those streets with chip seal in the summer months.

Pre-chipping restores the original width of a street while improving its longevity.

And what about the work being done to improve drainage at the intersection of Spouse Drive and Viewpoint Drive in the heart of town?

Davis said paving of Viewpoint and Spouse drives was completed this past week and that, by Thanksgiving, the work will be “substantially complete.” It looks like December is the target for full completion, however.

A considerable section of Spouse Drive, from Tonto Way to North Stage Way Lane, had been closed to almost all traffic for several months, except for residents.

IN OTHER BUSINESS, the Council:

The Summit Tank site sits on the eastern face of Glassford Hill next to the Glassford Hill Summit Trail. A new 4 million-gallon storage capacity would provide water to the new Jasper subdivision and other areas in town.