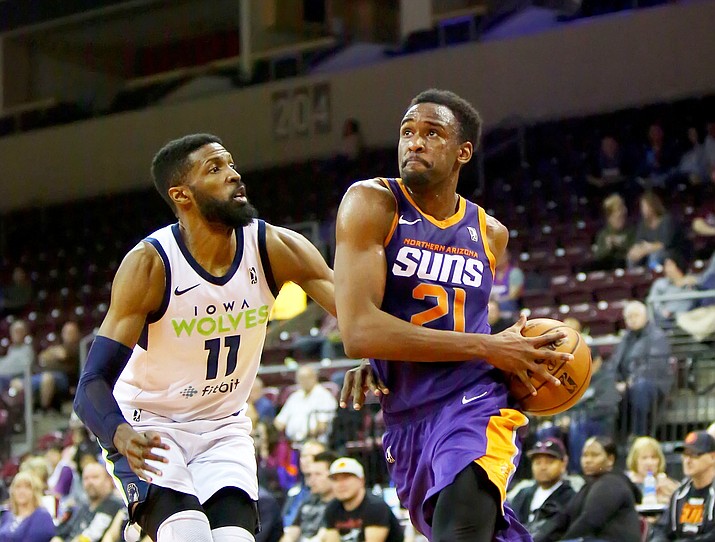 Aaron Epps (21) drives to the basket during a game against Iowa on March 19, 2019. Epps is one of four players returning to the Northern Arizona Suns this season. (Matt Hinshaw/NAZ Suns, file)

PRESCOTT VALLEY — The Northern Arizona Suns opened training camp Monday with 16 players on the roster, four of which are hoping to return for a second season at Findlay Toyota Center.

Aaron Epps, ShawnDre Jones, Daxter Miles Jr. and Trayvon Palmer are all returning from a club that finished 12-38 overall a season ago.

The 6-foot-10 Epps was selected by Northern Arizona a year ago in the first round of the 2018 NBA G League Draft out of LSU.

Jared Harper, who signed a two-way contract with the Phoenix Suns out of Auburn, is on the training camp roster, along with four affiliate players including David Kramer, Norense Odiase, Tariq Owens and Troy Williams.

Odiase and Owens, key players in Texas Tech’s run to the NCAA national championship game last season, were in training camp with the Phoenix Suns in Flagstaff but were waived Oct. 15.

Other players in camp for Northern Arizona this week in Prescott Valley include Anthony Lawrence II, who was selected with the No. 1 overall pick in the 2019 NBA G League Draft this past Saturday, with Keljin Blevins (No. 15) and Miles Reynolds (Traded for Long Island No. 27 pick).

Brandon Alston, James Daniel III, Jaron Hopkins and Stephen Ugochukwu were all local tryout players who have been invited to camp.

There are a minimum of 10 players on a G League roster, not including a pair of two-way contracted players, if available. A team’s active roster may expand up to 13 players if its parent club assigns players from the NBA roster.

Northern Arizona is scheduled to hold training camp this week, then host the South Bay Lakers for a preseason game at the Findlay Toyota Center in Prescott Valley on Saturday, Nov. 2.

The game is free for all fans to attend.

The Suns tipoff the 2019-2020 campaign Saturday, Nov. 9, against the Agua Caliente Clippers in Prescott Valley. Tipoff is set for 5 p.m.