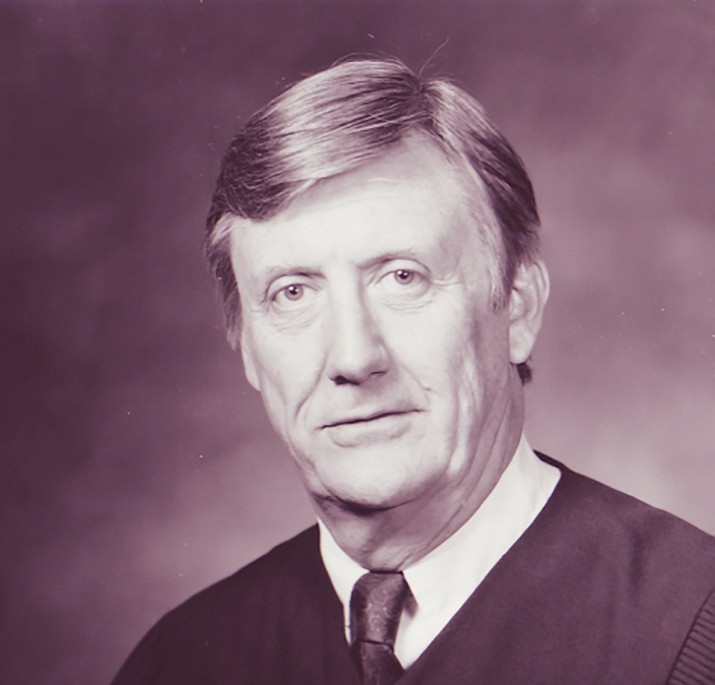 Paul Gerhardt Rosenblatt III, ended his journey on earth at his Prescott home on October 6, 2019. P.G. was born on April 4, 1928 in Prescott, Arizona, the youngest of six children of Paul Gerhardt Rosenblatt II and Dora Cordelia Leach. He is survived by his wife, Shannon Cookson Rosenblatt; his two daughters, Delia (John) Heck and Christiana Rosenblatt and two grandsons, Benton and Peter Heck; two grandhorses, Toukoutou and Junit, and his beloved service dog, Brea.

This extensive education and his abiding love for Arizona history prepared him for a myriad of cases over the course of his illustrious legal career.

Paul spent three years as an Assistant Attorney General for the State of Arizona, followed by four years as the Administrate Assistant for the 3rd District of Arizona, US Congress with Representative Sam Steiger.

He and Shannon returned to Prescott in 1971 to establish a private practice. Fortuitously, he was appointed Presiding and Juvenile Judge of the Superior Court for Yavapai County by Governor Jack Williams in 1973. In 1984 P.G. was appointed by President Reagan to the United States District Court for Arizona, a position he held until his retirement a few months shy of his 90th birthday in 2018.

Paul served in a many professional and public positions throughout his career such as Judge of the Hopi Tribal Court of Appeals, the Board of Visitors for the University of Arizona College of Law, President of the Arizona Judges Association, and the Arizona Academy. He also served as CLE (Continuing Legal Education) faculty for the Arizona Supreme Court, ALI-ABA (American Law Institute American Bar Association) courses, and the AJS-SJI (American Judicature Society – State Justice Institute). P.G. was elected into the Beta Phi Hall of Honor in 2003, a recognition as dear to his heart as his Sigma Chi brothers.

The law was not only his vocation but his avocation which kept Paul mentally engaged throughout his life. His respect for everyone who walked into his courtroom or chambers, regardless of their circumstances, was admired and noted by many, friends and adversaries alike. P.G. was recognized as a loyal, trusted, and supportive friend.

For P.G. language was a gift that he spent many years honing whether it was crafting learned opinions for work, letters and tributes for friends, or stories for his family. He will be remembered for his unusual kindness, gifted oration skills and complete devotion to all the communities in which he was engaged, most especially his family.

A service celebrating his life will follow in January. Donations may be made in P.G.’s memory to the Paul Rosenblatt Scholarship Fund at ACF of Yavapai County, 300 E. Willis, Suite B., Prescott, AZ 86301.