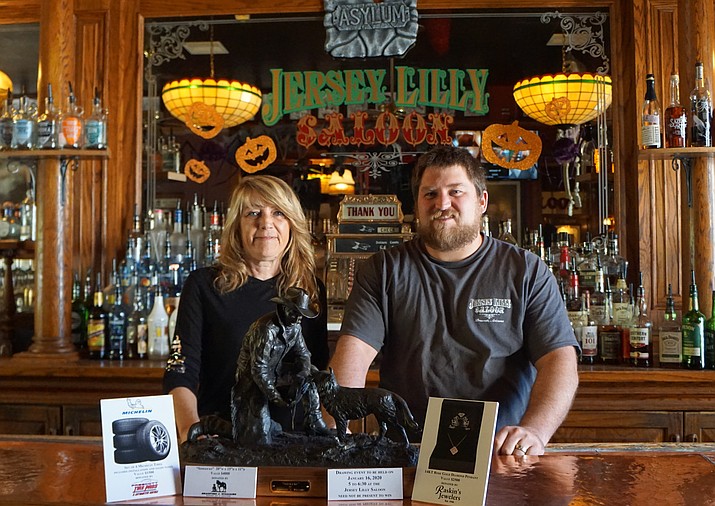 Susan Roberts and Josh Makrauer show the prizes available in this year’s annual Friends of Jersey Lilly Fundraiser for the Courthouse Lighting. Along with a bronze sculpture donated by local artist Bradford Williams, the drawing will feature a rose gold diamond pendant donated by Raskin’s Jewelers and a set of new tires from Prescott Tire Pros. (Cindy Barks/Courier)

Nearly one-half of the money that goes toward the cost of Prescott’s iconic Courthouse Lighting is collected by a saloon just across the street on the historic Whiskey Row.

Now in its 12th year, the Jersey Lilly Saloon’s Courthouse Christmas Lighting Fundraiser has collected tens of thousands of dollars over the years for Prescott’s annual lighting of the Yavapai County Courthouse Lighting.

The tradition continues this year, with the Friends of Jersey Lilly’s kick-off event from 4 to 8 p.m. Nov. 7 at Jersey Lilly Saloon, 116 S. Montezuma St.

For the past two years, the fundraiser’s total has come in at about $42,000. That makes the Friends of Jersey Lilly the single largest contributor to the annual lighting event.

The second-highest contributor is the City of Prescott, which puts in $30,000 a year for the Courthouse Lighting.

The total also brings Jersey Lilly’s contribution to nearly half of the $85,000 cost of the lighting.

Sheri Heiney, president and CEO of the Prescott Chamber of Commerce, which sponsors the Courthouse Lighting along with the Prescott Downtown Partnership (PDP), emphasized the importance of Jersey Lilly’s fundraising efforts this week.

In addition to the city’s $30,000, Heiney noted that the Chamber and the PDP each contribute $5,000 a year to the Courthouse Lighting. “All the rest of the money is raised by the Friends of Jersey Lilly,” she said. “That has been extremely helpful to us.”

Traditionally, the fundraiser has ended on the night of the Courthouse Lighting in early December, with a drawing for the winner of a piece of art typically donated by a local artist.

This year, the Friends of Jersey Lilly group is expanding on that by extending the length of the fundraiser and adding two new prizes for the drawing.

Co-owners Susan Roberts and Josh Makrauer say this year’s drawing will take place during a new event at the end of the holiday season – the Lights-Off Party on January 16, 2020 – to coincide with the date that the courthouse lights are extinguished for the year.

Roberts pointed out that the new schedule would give the fundraiser a longer time to raise money for the event. “We will sell tickets up to that time,” she said. “That gives us almost a month more.”

This year’s fundraiser will once again feature a bronze sculpture from local artist Bradford Williams, who has donated for the past several years. The piece of art, titled “Sidekicks,” is valued at $4,000 and is already on display at Jersey Lilly.

Each year, Jersey Lilly’s back bar becomes covered with colorful paper Christmas-tree bulbs that feature the names of the donors.

Roberts and Makrauer say that as soon as Halloween decorations come down this year, the bulbs will begin going up. Already, the effort has raised about $6,000 through the sale of the bulbs.

The winner does not need to be present at the Lights Out Party to win.

Also adding to the total fundraiser proceeds each year is the annual kick-off event in early November. As in previous years, this year’s event on Nov. 7 will feature a silent auction and a live auction, along with a Mexican-food buffet donated by El Charro Norte.

The event, which is open to the public, starts with the silent auction from about 4 to 5:30 p.m. The live auction, which will start at about 6 p.m. by Prescott Mayor Greg Mengarelli, is expected to feature more than 70 items.

The fundraiser dates back 12 years to when former Jersey Lilly owner Tommy Meredith saw a need for more lights on the courthouse plaza. The fundraiser brought in about $1,300 the first year and has steadily grown through the years. 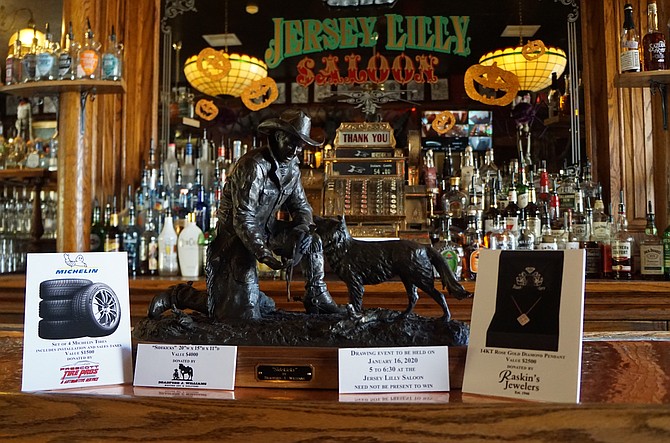 Prizes in this year’s drawing for the annual Friends of Jersey Lilly Courthouse Lighting fundraiser include a bronze sculpture created and donated by local artist Bradford Williams, along with a rose gold diamond pendant from Raskin’s Jewelers and a set of new tires from Prescott Tire Pros. (Cindy Barks/Courier)