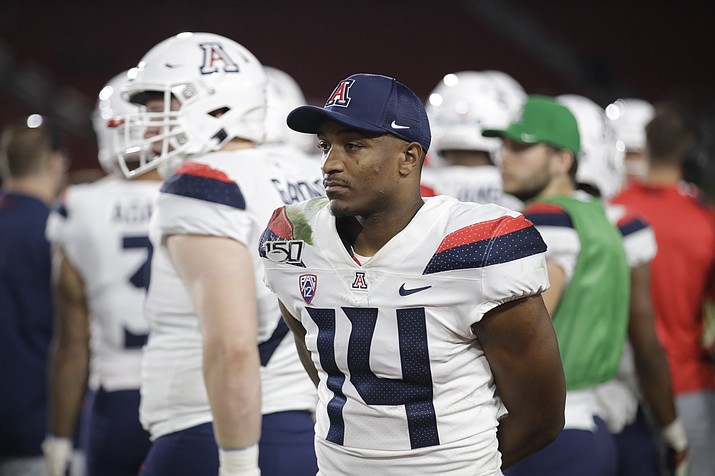 Arizona quarterback Khalil Tate (14) watches from the sideline as his team plays Southern California during the second half of an NCAA college football game Saturday, Oct. 19, 2019, in Los Angeles. (Marcio Jose Sanchez/AP, file)

STANFORD, Calif. — Stanford needs some good news on the injury front and it could come this weekend if K.J. Costello, the starting quarterback entering the season, is able to return from a thumb injury suffered in a loss at home against Oregon.

Costello has been practicing this week and Cardinal coach David Shaw remains hopeful he could be available against Arizona on Saturday. Backup Davis Mills is out with a calf injury. Costello has been sharing reps with sophomore Jack West, who started his first game in last week's loss to UCLA.

Stanford (3-4, 2-3 Pac-12) has other problems beyond its quarterback situation. Kicker Jet Toner is out for the year after suffering a lower leg injury last week and freshman Ryan Sanborn has taken over kicking duties along with his punting.

The Cardinal will also start three freshmen on the offensive line for the second straight week.

"I think our young guys are all going to be really good," Shaw said. "They have their moments where inexperience shows up playing against guys that are a little bit older and have a few more tricks. Every play is a learning experience."

The Cardinal are hosting a team in Arizona (4-3, 2-2) that has also had injury issues at quarterback and the offensive line. Kahlil Tate missed one game and was pulled from last week's game. The Wildcats also used two freshmen on the offensive line in their loss at Southern California last week.

"You got two teams coming off frustrating losses," Arizona coach Kevin Sumlin said. "Lack of depth, some new guys in there, they had some struggles. It's going to be the team that comes off the mat the quickest, be prepared and putting things behind them. Everybody is frustrated."

Tate was sacked six times by the Trojans before coming out of the game in favor of freshman Gabe Gunnell, who threw for 196 yards on 16 of 26 passing and two touchdowns. "It's not just the quarterback," Sumlin said. "The first thing I want is to get a response from the team. We had protection issues, route issues, blown assignments. It's more than just the quarterback we need to address." Tate's 51 passing yards were his fewest since last year's three-yard performance at Utah in which he played one quarter.

Stanford junior defensive end Justin Boles and junior tight end Tucker Fisk are working out with the offensive line to provide some depth. Junior discus thrower Jake Koffman has also joined the team. Fisk hasn't played on the line since his Pop Warner football days. "My take is we're running out of guys and if I'm the guy they need to step up, I'll step up. It's something new. I've been enjoying it, at least for now," he said.

Shaw held open tryouts to help in the kicking game. Sanborn is still expected to handle the kicking duties but "we found some possibilities," Shaw said. Freshman receiver Diego Preciado is practicing his kicking skills. He kicked and punted in high school. Freshman Alexander Thorpe was also added to the team. His father played soccer at Stanford.

Stanford had trouble containing UCLA quarterback Dorian Thompson-Robinson last week and Tate is a similarly athletic quarterback. "They've had their ups and downs," Shaw said. "There are moments when Khalil Tate looks like one of the best offensive skill players in America. Being able to corral him and keep him under wraps is a priority."