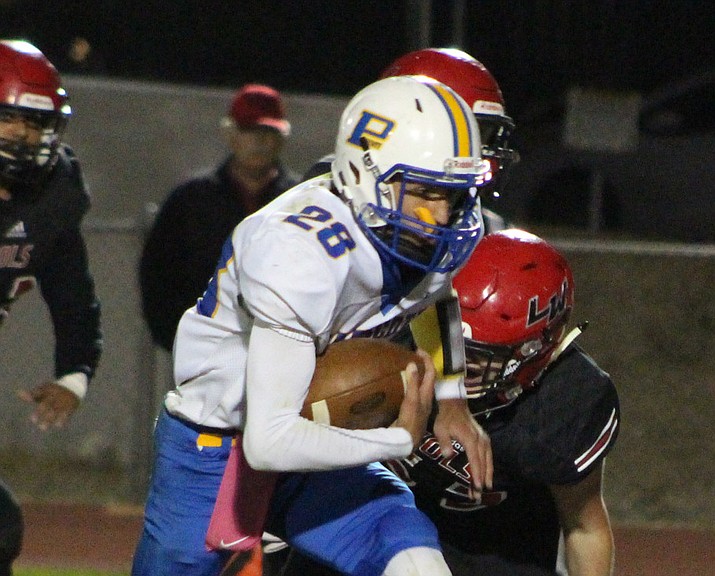 Prescott quarterback Dellin Boyd runs the football against Lee Williams on Friday, Oct. 25, 2019, in Kingman. Boyd threw for two touchdowns and ran for another in a 48-7 victory over Lee Williams. (Beau Bearden/Kingman Daily Miner)

KINGMAN — Quarterback Dellin Boyd threw for two touchdowns and ran for another, Sylas Espitia had two scores and the No. 15-ranked Prescott football team made quick work of Lee Williams in a 48-7 win Friday night.

It is the third straight victory for the Badgers (6-3, 4-1 Grand Canyon), which trailed 7-0 after the first quarter of play but scored 28 unanswered points in the second quarter to keep their postseason hopes alive.

“It took us a quarter to wake up, but after that we were pretty good,” Prescott head coach Cody Collett told the Courier in a phone interview Friday night.

Prescott has now won six of their last seven games after starting the season 0-2.

Espitia put the Badgers on the board with a 2-yard touchdown run at the 11:30 mark in the second quarter, then Aaron Greene’s forced fumble and recovery set up a Boyd touchdown pass to Colby Macbeth to make it 14-7.

Boyd found Brayden Nelson on an impressive over-the-shoulder diving grab to make it 21-7 and Nathan Wright’s touchdown run with 1:22 to go in the first half capped the second quarter scoring outburst by the Badgers.

Prescott wraps up the 2019 regular season with a road trip to rival Mingus in Week 11 action. The Badgers lost 12-10 in the Grand Canyon region title game a season ago to the Marauders.

Prescott could solidify a 4A state playoff spot with a win, but nothing is guaranteed in the power-point system. In fact, Collett said Friday night he told the coaches and his players there will be no talk next week about it.