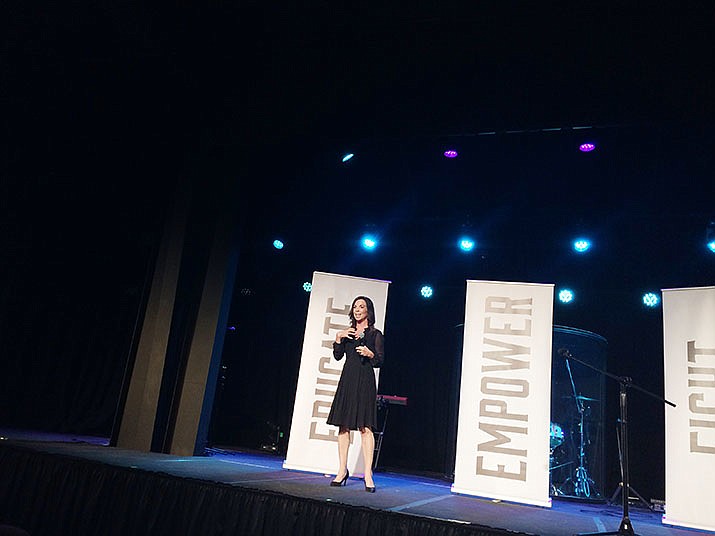 Katey McPherson speaks to parents and students about the role technology is playing in their lives today. (Nanci Hutson/Courier)

The seductive power of social media is such that teens are more stressed than ever about everything from grades to beauty, often in the shadows of a screen rather than with a strong support system.

The secrecy of today’s technology, too, entices sensitive adolescents to explore the world in ways that can be far more fraught with temptation than in any other generation. Their still-developing brains are so bombarded they can be left powerless to discern what direction to go.

So was the message delivered at this year’s first Armed to Know presentation delivered to some 150 teens and parents this week by long-time Arizona educator, national educational consultant and parenting training expert Katey McPherson. The greater Phoenix area mother of five daughters between the ages of 10 and 13 titled the program, “Stress Less Live More.”

Though McPherson touched on a myriad of topics that are ratcheting up the stress in the lives of teenagers and their households, she honed in on how technology is isolating teens and forcing them to become lost in a cyber fantasy world.

McPherson admits technology can be a powerful teaching tool when used appropriately. Yet she voiced fears that much of what students do with social media is not linked to advancing their education.

A one-time school administrator, McPherson said it was rare the time she witnessed students allowed to bring cellphones into classroom where those devices were employed for research and related assignments. Instead she said she watched teen’s texting their friends about the latest gossip, or posting photos to Snapchat and Instagram.

Anyone born after 1994 knows nothing of a world without cellphones, computers and video games, McPherson said.

And that technology is here to stay.

Armed to Know keynote speaker Katey McPherson from Phoenix area, a national educational consultant, talks about the impact of technology on stress in teens and society

So how do parents and teens navigate this new world without losing their own identities and ability to share and build meaningful relationships that require one-on-one interaction?

Imagine a fairy tale kingdom with a court jester. The jester – technology – is viewed by the villagers as fun, someone of clear value, McPherson suggested.

“But you don’t put him in charge of the kingdom,” she declared.

When it comes to how children and teens are taught about technology, McPherson said parents and educators still play a big role; babies don’t come into a family with their own cellphone plan.

“I don’t think any reasonable person who goes out into society and looks at people, and sees where there attention is focused, will disagree technology is captivating our society,” said Yavapai County Superintendent Tim Carter.

Against that backdrop, Carter said is a need to generate solid data that offers more insight into best practices when it comes to integrating technology into both education and daily life.

“What we have to do is find the positive things, and diminish, and illuminate, the negatives as much as we can,” Carter said.

As for when it’s time to introduce children to technology, McPherson is clear that depends on the child.

Her best advice to parents: model good technology citizenship. Hold children accountable. Expect they will make mistakes, and sometimes act on impulse, but instill early on that technology is no different than giving them the keys to a race car, she suggested. You don’t put them in the ignition until you are trained to maneuver it on the track, she noted.

A family technology contract is a good way to start, complete with time limits, parental controls to track children’s technology use, and a docking station that is kept by the parent’s bedside at night.

McPherson, too, emphasized the need for parents to let their children explore their worlds and find their voice, with and without technology.

Students need to “sit in their yuck” when they make mistakes as failure is always part of a path to success, she said.

In closing, McPherson emphasized dignity. Each person has their own inherent worth, and no matter what, that needs to be respected and protected, inside and outside the home, she said.

“You want your kids to have conflict so they can rise up and get strong — let them be in control of their life,” she concluded.