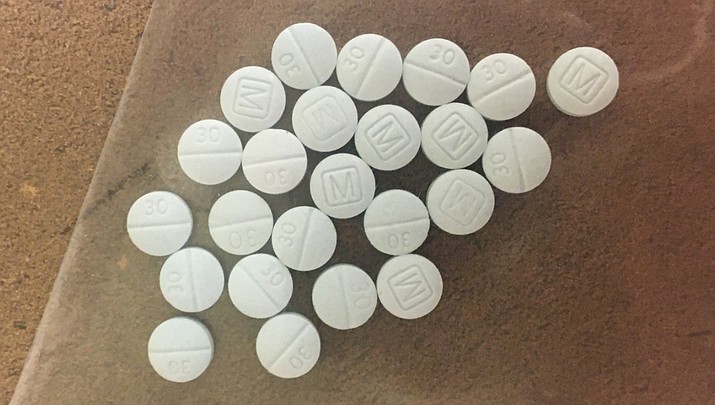 Yet another person is believed to have overdosed on mimic oxycodone pills containing fentanyl.

This time it’s a 17-year-old boy in Cottonwood, according to a Yavapai County Sheriff’s Office (YCSO) news release.

Partners Against Narcotics Trafficking (PANT) detectives were called to the teen’s home in the 4000 block of E. Wild Stallion Trail on Monday, Oct. 21.

They learned that a friend of the teen went to check on him after sending several text messages with no response. The friend found the teen face down on his bed and cold to the touch, the release states.

Medical personnel arrived soon after and confirmed the boy was dead.

Detectives searched the bedroom and found an open safe near the teen that contained 24 off-white pills stamped ‘M/30,’ according to the release.

“With the markings of ‘M/30,’ the off color appearance, along with current trends associating the overall appearance with fentanyl and the intelligence known to PANT on the history of such pills, they are believed to be mimic Oxycodone containing Fentanyl,” YCSO spokesperson Dwight D’Evelyn stated in the release.

Detectives suspect the teen was selling the pills based on the number found along with a significant amount of money in small denominations, D’Evelyn stated.

The teen’s body was released to the custody of the Yavapai County Medical Examiner. Initial test results from the medical examiner indicate traces of fentanyl. PANT detectives are now working to determine the source of the pills, according to the release.

“As has been shared so many times in the past, please alert those you care about who may be tempted to try this deadly poison,” D’Evelyn said. “One pill could be your last. Is it worth it?”

And as has been the case for nearly a year, Yavapai Silent Witness is offering a $1,000 reward for any tip leading to the arrest of person(s) dealing fentanyl. To report a tip, call 1-800-932-3232 or go online at yavapaisw.com.