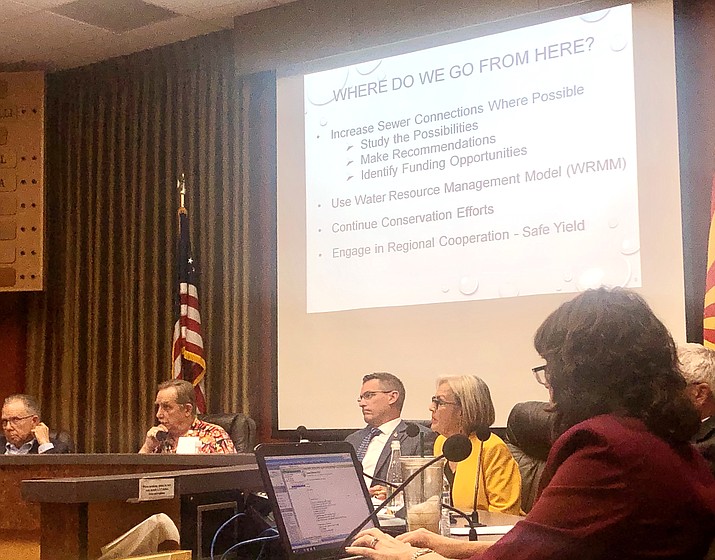 In this undated photo, the Prescott City Council talks about water issues. Prescott’s contention that it can use its groundwater allocation for new growth of up to about 85,000 population appeared to get an affirmation from the Arizona Department of Water Resources (ADWR), according to a press release Wednesday, Oct. 23, 2019. (Cindy Barks/Courier, file)

Prescott’s contention that it can use its groundwater allocation for new growth of up to about 85,000 population appeared to get an affirmation from the Arizona Department of Water Resources (ADWR) this week.

While a longstanding state rule limits the total amount of groundwater that can be pumped, “It does not restrict the location of groundwater pumping or delivery within a designated provider’s (Prescott’s) area,” states a Wednesday, Oct. 23, letter from ADWR Director Thomas Buschatzke.

The letter added: “The Arizona Department of Water Resources does not have authority to regulate how Prescott allocates its water supplies within its service area.”

Prescott Mayor Greg Mengarelli said the letter confirms what the city had long been hearing verbally from the state department about Prescott’s use of its groundwater.

“It’s not new news for us,” the mayor said of the ADWR letter late Wednesday. “It’s just nice to have it documented.”

He added that the two-page letter that was copied to the City Attorney’s office on Wednesday “just kind of puts a stamp of approval” on the city’s plans for its groundwater.

Some controversy arose on those plans Tuesday, Oct. 22, when the Prescott City Council heard an update from city staff on the proposed water-policy changes that have been under review since this past summer.

Several members of the public cautioned the council members Tuesday that the proposal to begin allowing city water service outside city limits would be detrimental to the long-term of goal of safe-yield (the condition of balance between the amount of water being pumped and amount being recharged back into the ground).

Leslie Hoy of the Citizens Water Advocacy Group (CWAG) asked the council to postpone a decision on the portion of the policy change that deals with allowing water distribution outside the city, maintaining that the move would have “tremendous implications for our future.”

And local resident Tom Atkins told the council that the city is operating under “water mythology” rather than water reality.

Atkins maintained that the level of the Chino Valley-area wells that provide the bulk of Prescott’s water supply are dropping by about 1.5 feet per year.

“This data is very different from the water myth presented by the mayor and a number of City Council members who state that there is an abundance of water available for growth,” Atkins said.

Hoy added that before changing its policy on water service outside city limits, “the city must prove that allocating the groundwater allowance to new development is consistent with the intent of the 1980 Arizona Groundwater Management Act and with the management goal for the Prescott Active Management Area).”

But on Wednesday, Mengarelli said the letter from ADWR removes any remaining doubt about that, and he said the City Council is on schedule to vote on the water policy changes on Nov. 12, as planned.

Prescott Senior Assistant City Attorney Clyde Halstead, who has overseen the proposal for water policy changes, said Wednesday that the ADWR letter affirms the city’s contention that it can use its groundwater allocation for uses other than previously platted subdivisions.

“This letter from ADWR confirms that the city may manage its water supply in a way that best meets the needs of the citizens,” Halsted said. “The city is committed to the long-term sustainability of water supply in the region, and allowing for flexibility in supply and allocations is one part of that goal.”

And ultimately, Halstead said the letter relates to the city’s view that it can use the groundwater for growth that was envisioned in Prescott’s 2015 general plan – to an eventual population of about 85,000.

For more than a decade, city officials had viewed importation of water from the Paulden-area Big Chino aquifer as necessary for its ultimate build-out to 85,000 people.

In light of the city’s shift in water policy, however, and with Wednesday’s confirmation from ADWR, Halstead said the available water would be able to handle the expected growth without the pipeline.

“We can do everything within the general plan without water from the Big Chino,” he said.

Wednesday’s letter was addressed to CWAG President Gary Beverly in response to the organization’s recent inquiry about whether the city could devote its groundwater allocation to uses other than the subdivisions that were platted before the 1999 groundwater-mining declaration.

Beverly and Hoy were both unavailable for comment about the letter Wednesday afternoon.

The ADWR letter explains that the groundwater allowance “is the amount of groundwater that can be pumped without replenishment of the aquifer and still be considered consistent with the management goal of the AMA (Active Management Area).”

It adds that under Prescott’s current designation, the city can use 9,466 acre-feet of groundwater per year, along with 7,041 acre-feet of surface water and effluent (alternative water) per year. (An acre-foot equals 325,851 gallons of water).

A water summit that is expected to involve participation by neighboring communities, Yavapai County, and the Arizona Department of Water Resources has been scheduled for mid-November.

The City of Prescott announced this week that the public water summit has been scheduled for 1 to 3 p.m., Thursday, Nov. 14, at the Prescott Centennial Center, 1989 Wineglass Drive, near the Prescott Regional Airport.

“The City has invited representatives from the Arizona Department of Water Resources (ADWR), Yavapai County, the towns of Prescott Valley, Chino Valley, and Dewey-Humboldt,” reported a Wednesday, Oct. 23, news release from the city.

The release adds that each municipality will be asked to provide a brief presentation about their current water resource management program and policy and to answer questions from the public.

In addition, “ADWR will speak about the Prescott AMA (Active Management Area), and will answer questions from the municipalities and the public.”