Bullying. What is it and how do we stop it? 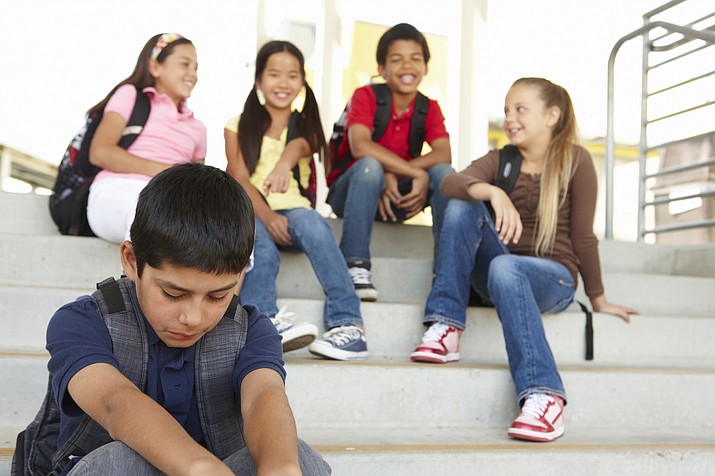 R. Bradley Snyder stands with some statistics in the background related to bullying in schools. 95 percent of bullying takes places in schools. (Joe Howard/PUSD)

All it takes to stop a bully is for one person to stand up and befriend the target, according to one expert.

Bullying is all about power and the pleasure of performing in front of spectators, declared R. Bradley Snyder, the executive director of the Dion Initiative for Child Well-Being and Bullying Prevention at Arizona State University in Phoenix.

A boy or girl who is a loner and deemed weak or different is often the target of bullying, classified as intentional, persistent abuse and taunting in front of others, Snyder explained. Even cyberbullying, he said, has a person-to-person context as it is shared with audiences that then may also target the victim.

Yet bullying can be quelled when someone wraps the proverbial arm around the target and showcases for the bully and bystanders that the person is not alone; they are valued by someone else, Snyder assured. He showed a short video where some high school boys were picking on another until a lone boy came, wrapped an arm around the shoulder of the target and led him away. No words were spoken to the bully.

Snyder is trained in research methods and developmental psychology with an emphasis on how those apply to children and youth. Snyder, trained in development psychology as it pertains to children and teens, was invited by the Prescott Unified School District to present his program titled, “Must Stop Bullying” Thursday night that was attended by a small group of parents and educator at Prescott High School. He has previously met with school administrators about the issue.

Though school leaders would have appreciated a larger audience, Snyder’s message still resonated with all who did attend. He was able to both clearly define bullying behavior — it is far more serious than routine playground spats — and offered solutions on how to change school and community climates so it becomes less acceptable, and therefore, less prevalent.

Science is clear that bullied students are not as successful in school, and it can lead to mental health difficulties, Snyder said. Without intervention, bullies struggle with relationships and are known to become violent in later years, he said.

National statistics indicate about 21 percent of students are bullied in person in a typical year, or one in five students. That number increases to about 35 percent in ages 12 to 18. Cyberbullying rates range around 16 percent in those age groups.

In Arizona, Snyder said the statistics indicate some 52 percent of eighth graders reported incidents of in-person bullying, and about 22 percent online. The percentages drop with age.

Mile High Middle School Principal Andy Binder said his faculty and students are continually encouraged through an assortment of efforts to bolster peer-to-peer relationships. They have affirming posters on the walls and encourage personal greetings and positive accolades to all students every day, he said.

Prescott Unified Superintendent Joe Howard said the principals spend a lot of time on school culture, embracing diversity and the unique personalities of every student. Programs such as “Capturing Kids Hearts” and “Kids at Hope” are all about reinforcing the district’s motto: “Every Child, Every Day.”

For those who might suggest bullying is simply a part of growing up, Snyder said science debunks that myth. Bullying can have lasting, harmful impacts on a victim’s life, as does being a bully, he said.

If bullying is not acknowledged, and confronted, the target can develop emotional traumas such that they are constantly anxious and fearful of others, or they become inappropriately defensive, Snyder said.

In worst-case scenarios, Snyder said, victims can succumb to addictions and other coping mechanisms that can shorten their lives. He is careful to say bullying is not to blame for suicide, but it can be a factor in cases of suicide.

Bullying prevention in schools needs to be an ongoing effort, one that embraces clear expectations on how students are expected to treat one another, Snyder said. At home, he noted, parents need to listen to their children when it becomes to bullying episodes, and empower them to seek help from adults who can do so.

“A bully-free culture is a community culture,” Snyder said. “No one left behind.”