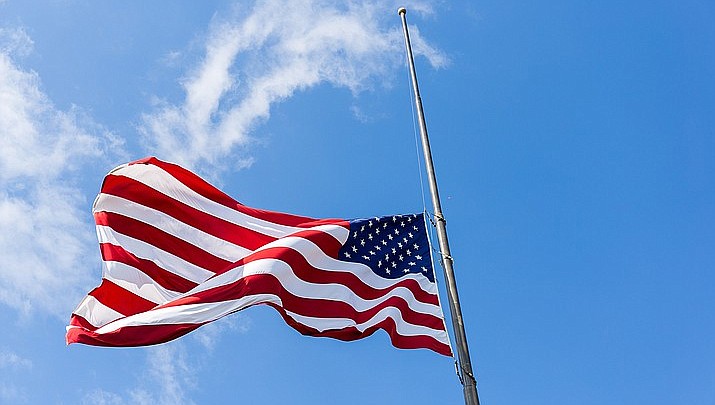 Pfc. Garcia, who is from Peoria, died Sunday morning during a training accident at Fort Stewart, Georgia. Flags will also be lowered on the day of interment.

“Arizona mourns the tragic loss of Private First Class Antonio Garcia,” Ducey said in a statement. “Pfc. Garcia had taken an oath to defend our nation. He served honorably, and will be remembered for his commitment to duty and willingness to serve. My sincerest condolences go out to his family and loved ones during this difficult time. In honor of Pfc. Garcia’s life and service, I’ve ordered flags at all state buildings be lowered to half-staff.” 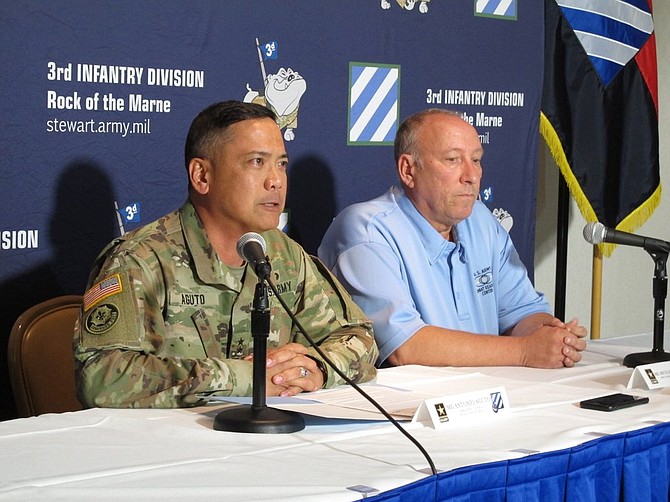 Army Maj. Gen. Antonio Aguto, left, and Army accident investigator Michael Barksdale hold a news conference, Monday, Oct. 21, 2019, at Fort Stewart, Ga., about a training accident that killed three soldiers and injured three others. Aguto said the soldiers' armored vehicle rolled off a bridge and landed upside down in a stream during a training exercise being conducted before dawn the day before. The cause of the fatal crash is being investigated. (AP Photo/Russ Bynum)

FORT STEWART, Ga. — Soldiers were training in darkness when their armored vehicle fell from a bridge and landed upside down in water below, killing three of those inside and injuring three others, the commanding general of Fort Stewart said Monday.

Maj. Gen. Antonio Aguto struggled to hold back tears at a news conference as he read the names of the soldiers who died Sunday during a training exercise hours before dawn.

“It is hard enough when you lose one soldier,” Aguto said. “But when you lose three at one time, that pain is amplified. And we are really feeling and sharing that pain.”

The soldiers belonged to the 1st Armored Brigade of the Fort Stewart-based 3rd Infantry Division. Aguto said the deadly crash happened shortly before 3:30 a.m. Sunday as the brigade was training for a rotation early next year at the Army’s National Training Center in California.

Six soldiers were riding in a Bradley fighting vehicle in a training area of the sprawling Army post southwest of Savannah when it “rolled off a bridge and was submerged upside down in a stream,” Aguto said. 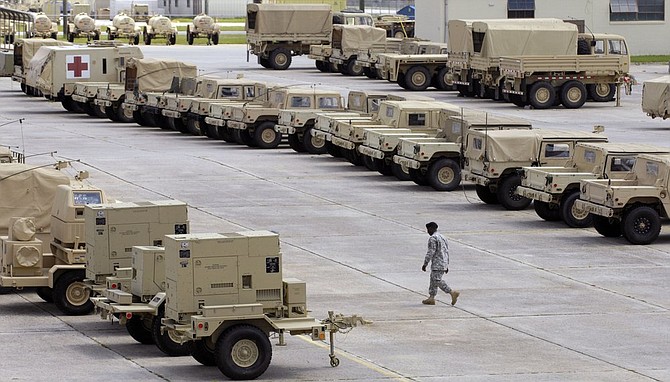 In this 2009, file photo a soldier walks through the 4th Infantry Brigade Combat Team motor pool at Fort Stewart, Ga. U.S. Army officials say three soldiers were killed and three others were injured when the armored vehicle they were riding in rolled over into water during training at Fort Stewart. (AP Photo/Stephen Morton, File)

Aguto and Michael Barksdale, the Army’s lead investigator on the crash, declined to give further details such as how far the vehicle fell and the depth of the water. The Army is conducting autopsies to determine how the soldiers died. Investigators from the Army Combat Readiness Center at Fort Rucker, Alabama, expect to take up to four weeks before giving Fort Stewart commanders a preliminary report, Barksdale said.

Three other soldiers in the vehicle were injured. Two were treated and released from an Army hospital the day of the crash. The third remained hospitalized Monday with injuries that weren’t considered life-threatening, Aguto said.

The training exercise being conducted early Sunday had been planned and rehearsed ahead of time, Aguto said. And while the remnants of Tropical Storm Nestor swept across southeast Georgia late Saturday and early Sunday, Aguto said there had been no severe weather warnings and the storm’s rain and winds had already passed before the crash occurred.

At least 12 Army soldiers have died in nine training accidents across the U.S. in 2019, including the crash Sunday at Fort Stewart, according to the Army Combat Readiness Center, which investigates fatal accidents.

“The training is tough, realistic and we train for all sorts of conditions no matter where we would go,” Aguto said. “You would expect us to do that. And that was the case in this instance.”

Aguto said Fort Stewart would plan a memorial service for the soldiers who died. Jenkins recently finished his 18th year in the Army and was a veteran of two tours in Iraq.