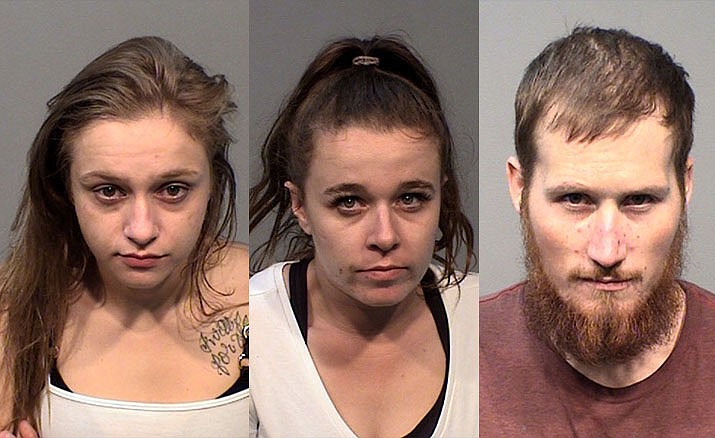 Two women and a man were arrested Thursday, Oct. 17, for allegedly stealing merchandise from a variety of stores in Prescott and Prescott Valley.

Police caught wind of the alleged criminal activity when someone reported seeing several people stealing items from a store in the Prescott Gateway Mall, according to a Prescott Valley Police Department (PVPD) news release.

The caller followed the suspects as they drove to the Crossroad Shopping Center in Prescott Valley, where officers then responded.

The woman seen getting into the car was later identified as 24-year-old Kelsey Lynn Prevatt of Chino Valley.

Officers tried pulling the car over in the parking lot, but the car continued to the front of Ross, where another woman, later identified as 22-year-old Alexandria Marie English of Prescott Valley, jumped from the front seat of the car and ran toward the store front, police said. Officers quickly intercepted and detained her.

The car then started driving northbound and was stopped by other officers in the parking lot. The driver of the vehicle was 28-year-old Cody James Wilkins of Prescott.

When interviewed separately, the suspects pointed to each other as responsible for the thefts, according to the release.

The car, which belonged to Prevatt, was found to have a fictitious tab applied to the license plate that extended the purported expiration date, according to police. It instead belonged to an unknown motorcycle.

Wilkins was arrested for one count of organized retail theft and one count of fictitious tab on license plate.

“The Prescott Valley Police Department wishes to thank the citizen reporting this suspicious activity and wants to remind everyone that active cooperation between residents and law enforcement is the best way to keep our community safe,” PVPD spokesperson Jerry Ferguson said.

Editor's Note - This article has been updated to include the city or town where each of the accused has an address.