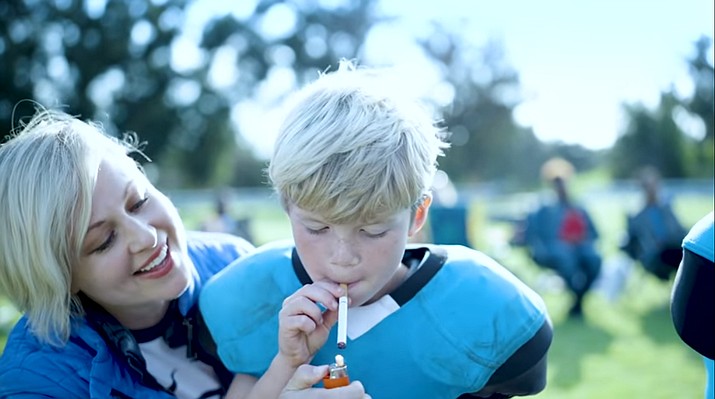 A “Tackle Can Wait” campaign public service announcement shows a mom lighting a cigarette for her son, who is a youth football player. The PSA aims to show how youth ages 5 to 14 are 10 times more likely to get the brain disease CTE by playing tackle football. (Screenshot)

The recent “Tackle Can Wait” public service announcement has caused a stir among parents, coaches and players, forcing them to at least think about the potential harm playing tackle football at a young age can cause.

The PSA begins on a football field with kids dressed in full gear playing a game. One player is tackled roughly to the ground and a whistle blows. A coach then begins handing out cigarettes to his players, and also shows a mom lighting one up for her son.

As the camera pans across a line of kids in football gear smoking cigarettes, words come up on the screen that read, “Kids who start tackle at age 5 versus 14 are 10 times more likely to get the brain disease CTE.”

A young narrator is also heard saying, “Tackle football is like smoking, the younger I start, the longer I’m exposed to danger.”

In 2013, the NFL reached a settlement with around 4,500 former players (or their estates).

And the numbers are growing.

The “Tackle Can Wait” initiative certainly sends a powerful message, not unlike those “Truth” smoking commercials launched in the late 1990s showing the most gruesome scenes of what smoking does to one’s body.

The campaign was aimed at teens after a study revealed 23% of teens were already smokers. In 2017, that number was down to 10.4%, according to the National Health Interview Survey from the U.S. Centers for Disease Control and Prevention.

President Richard Nixon began the path toward a smoke-free nation by signing the Public Health Cigarette Smoking Act in 1970, which banned cigarette ads from airing on television and radio.

Of course we all remember the 1980s commercial with a man asking, “Are you still unclear what drugs do to your brain?” Then cracks an egg in a frying pan and shows us.

These powerful images have always given the public pause, and “Tackle Can Wait” is no different.

Chris Nowinski, co-founder of the Concussion Legacy Foundation that is part of the “Tackle Can Wait” campaign said in a recent article, “Concussion PSA compares youth football dangers to smoking,” that, “Tackle football is really a man’s game, and it’s incredibly dangerous to the developing brain.”

“We’re trying to help parents visualize that those two things are equally bad: Letting your kid smoke and letting your kid play tackle football are both bad ideas,” Nowinski said.

To learn more about the “Tackle Can Wait” campaign, visit: https://www.tacklecanwait.com/. For more information on CTE, visit: https://concussionfoundation.org/CTE-resources/what-is-CTE.