Taste of Prescott tickets sell out online; some to be available at the gate 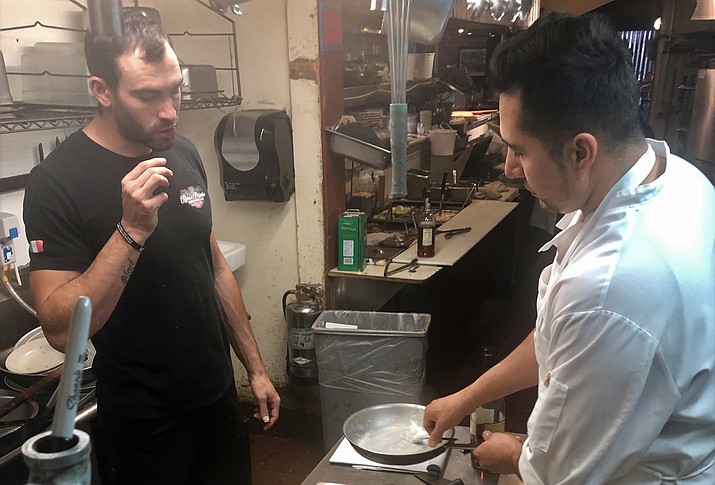 Online tickets for Saturday’s Taste of Prescott event sold out well before the expected cut-off time, but organizers say there are still plenty of opportunities for the daylong Everybody’s Hometown Festival.

Skyler Reeves, downtown-Prescott restaurant owner and organizer of the inaugural weekend festival, reported Thursday afternoon, Oct. 17, that the event had cut off its online tickets at 750 earlier that day.

But, he said, 100 Taste of Prescott general-admission tickets will still be available at the gate for $35, first-come-first-served, starting at noon.

In addition, Reeves said plenty of tickets are still available for the evening concert that is planned to cap off the Everybody’s Hometown Festival.

Live entertainment will take place from 11 a.m. to 10 p.m., and will feature free admission until about 5 p.m. The entertainment will start with a yoga class hosted by Bend Hot Yoga at 11 a.m., and continue with other activities such as salsa dancing in the street and a hotdog-eating contest.

Local bands are scheduled to do sets throughout the day from 11 a.m. to 5 p.m.

Then, from 5 to 10 p.m., a $20 general standing-room admission will be charged to take in a range of bands, including The Cheektones, Scandalous Hands and Hollywood U2, a U2 tribute band.

More information about the event is available online at: https://www.eventbrite.com/e/everybodys-hometown-festival-tickets-65222923520.

The Everybody’s Hometown Festival will also feature a family-fun area that will offer free games as well as ticketed arcade-style games and rides.

The festival is in its first year, and is intended to be an annual signature event in downtown Prescott.

Proceeds will go toward funding the annual Christmas Courthouse Lighting.