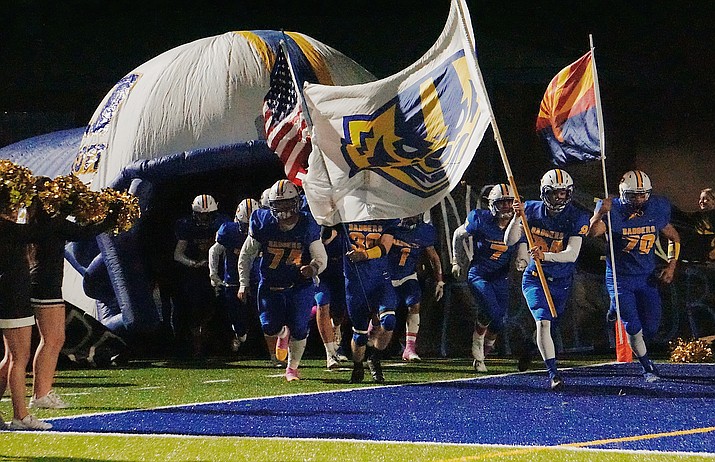 Prescott football exits their tunnel and storm the field before a game against Bradshaw Mountain on Friday, Oct. 11, 2019, at Bill Shepard Field in Prescott. (Aaron Valdez/Courier, File)

Who: Mohave Thunderbirds at #16 Prescott Badgers

Last Week: Prescott – Trailing 19-14, quarterback Dellin Boyd found tight end Aaron Greene on a miraculous 20-yard touchdown throw where Greene bulldozed his way through three Bears defenders for a score, giving Prescott a 22-19 win over their cross-town rival; Mohave – The Thunderbirds allowed 28 unanswered points in the first quarter against a Coconino club that was highly motivated after a big win over Prescott the week prior. Mohave allowed 21 points in the second quarter and eventually lost 62-13, just one week after upsetting Mingus 29-28. The loss to Coconino halted a three-game win streak.

The Setting: Prescott needs to take care of business against the Thunderbirds tonight if they’re going to stay in the mix for the Grand Canyon region title. Coconino holds its own fate, however. If the Panthers beat Lee Williams tonight, they’ll be region champs with five wins. Even if Prescott or Mohave win out, Coconino holds the tiebreaker with wins over both clubs.