Talk of the Town: Granite Dells Regional Park and Preserve: How we get there 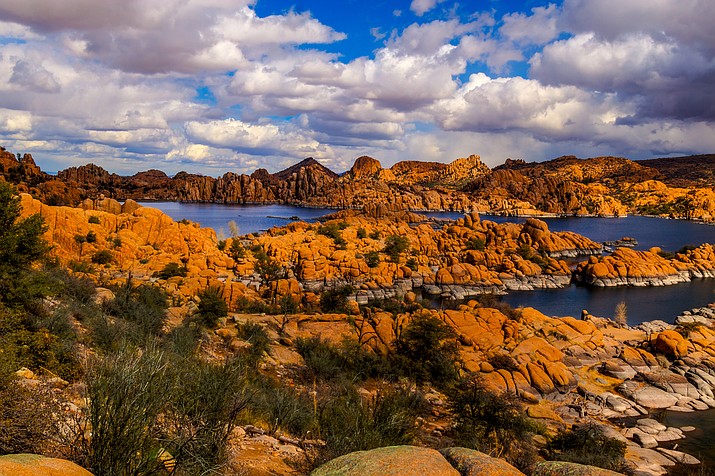 Prescott’s Granite Dells area encompasses a vast patchwork of public and private lands. Over the years, the City of Prescott has bought and preserved the Dells-area Watson and Willow lakes, as well as about 424 acres of Dells open space. (Courier stock photo)

In 2008, Prescott’s Open Space Acquisition Advisory Committee finalized the years-long task of developing an Open Space Master Plan. The committee — appointed by Mayor Rowle Simmons in 2003 — was formed to advise the city on open space acquisition using money from the sales tax passed in 2000. The idea was that more than $40 million would be spent on open space, with the plan guiding the process.

The plan identified potential open space areas that would be “significant additions to the economic, scenic, historic and recreational resources available to the citizens of Prescott.” Those included the wildlife corridors, streams, lakes and rocks in the Granite Dells, as well as Glassford Hill and its southern flank Klein Mesa.

Some of the plan’s objectives have been met, like saving Willow and Watson lakes, but most of the recommended acquisitions never happened. Some areas are now lost to development, like the Dalke Property, which has been getting scraped by bulldozers for the past decade.

Today, priority open space is still vulnerable to development. This includes Arizona Eco Development’s proposal for the Dells, but there’s also the expansion of Yavapai Hills looming above Watson Lake on Klein Mesa as well as the Storm Ranch Company’s approved 227-home subdivision along the Peavine Trail near Watson Lake.

These developments are real; they’re subdividing areas long recognized for open space values, and they’ll change your experience at Watson Lake and the Dells dramatically. Perhaps even more significantly, the 4,000 acres of State Trust land covering Glassford Hill and Klein Mesa can be auctioned off to developers at any moment.

In response to the continued threat to the remaining open space identified in the plan, Save the Dells developed its Regional Park concept, which we later expanded to include “Preserve” due to feedback from citizens and community leaders who are concerned about the potential impacts of unfettered recreational development. We debuted this long-term goal in May 2018, when the Prescott City Council hosted a public meeting on AED’s annexation proposal attended by more than 400 concerned citizens.

Our proposed Regional Park and Preserve builds on the foundations of the 2008 plan and years of citizen advocacy before that. We proposed a huge goal to match the scale and urgency of the moment, and if the recent Primary Election is any indication, our proposals have overwhelming public support.

Unfortunately, there’s some confusion about what a Regional Park and Preserve could be. We take responsibility for not communicating that well enough, but as you know, most of our attention has been focused on our immediate goal of negotiating a “win-win” solution that protects the key 500 acres of AED’s south annexation in the Dells.

Protecting AED’s 500 acres will be an important addition to Prescott’s open space, but it alone isn’t the Regional Park. A Granite Dells Regional Park and Preserve can be much larger — over 7,000 acres actually — including currently protected lands, newly acquired parcels and the swath of state land encompassing Glassford Hill and Klein Mesa.

Sure, accomplishing this requires significant investment. And regrettably, the sales tax that ultimately raised $191 million was used almost entirely for road construction, with under $20 million being spent to advance the objectives of Mayor Simmons’ committee. So we need to secure appropriately scaled funding mechanisms.

But first, we need political will. We need our elected leaders to commit to working together. I see no reason why the leaders of Prescott, Prescott Valley, Yavapai County, and the State of Arizona can’t rise to this challenge and work with Save the Dells and the Granite Dells Preservation Foundation to leave a legacy that will better our communities forever.

Our goal is big, but the people and wildlife of this area deserve nothing less. Let’s get to work.

Joe Trudeau of Prescott is co-founder and conservation director of Save the Dells.

Plan to buy land for open space bogs down
A wish list<BR>Open space plan offers variety
Column: Opportunity knocks for Prescott tourism
Preserving nature
Fields: Save the Dells - Leaving a legacy of our own
Event Calendar