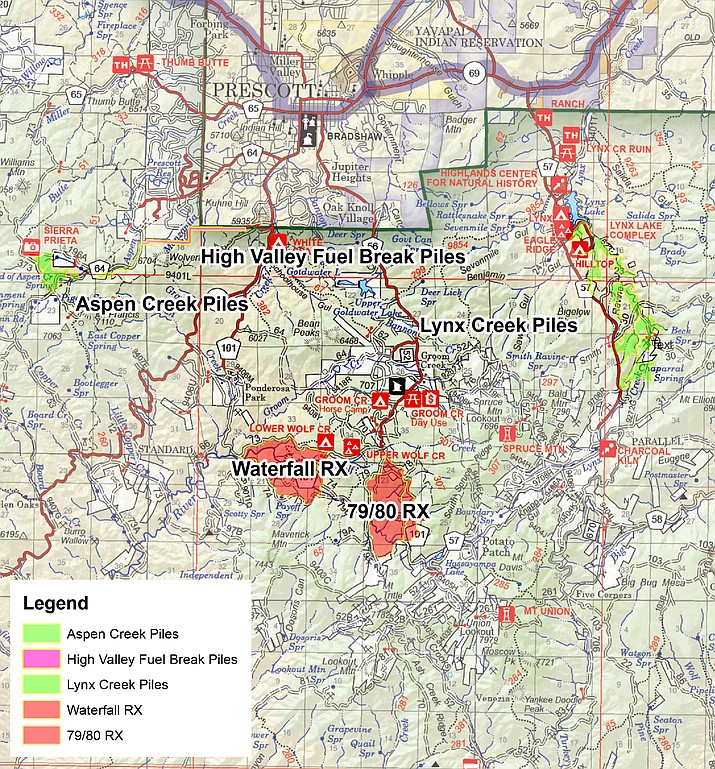 A map of the October 2019 burn areas on the Prescott National Forest, Bradshaw Ranger District. (Courtesy)

Fire mangers on the Prescott National Forest plan to start treating the 79/80 and Waterfalls prescribed burns south of Groom Creek on Wednesday, Oct. 16.

The 79/80 burn area is about 662 acres just off Senator Highway near Upper Wolf Creek Campground.

Fire managers may use aerial ignition devices in addition to ground ignitions for both burns, according to a Prescott National Forest news release.

All burning is weather dependent, according to the release. When burning begins, fire managers will broadcast that information at www.facebook.com/PrescottNF and https://twitter.com/PrescottNF?lang=en.

These burns are part of several fuel treatments Prescott National Forest has planned for throughout the month of October.

In the interest of safety, forest visitors are encouraged to use caution when traveling near such burns as firefighters and fire-related traffic will be in the area. Drivers should also be prepared for short delays along nearby roadways.

Prescribed fires are one of the most effective tools available to resource managers for restoring fire-adapted ecosystems, the news release states. These burns will mimic natural fires by reducing hazardous fuels accumulations, and reintroduce fire into a fire dependent system; recycling nutrients and increasing habitat diversity. Prescribed fires are managed with firefighter and public safety as the first priority.