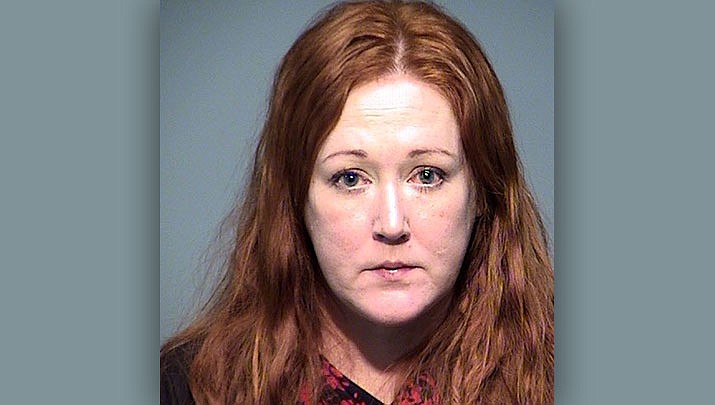 Linda Rodkey, 37, from Chino Valley was arrested after allegedly driving drunk through Chino Valley and causing damage to both vehicles and a street sign on Oct. 14, 2019. (YCSO/Courtesy)

A Chino Valley woman was arrested on multiple charges, including super extreme driving under the influence (DUI), after allegedly causing two accidents and running over a street sign in Chino Valley midday Monday, Oct. 14.

The Chino Valley Police Department (CVPD) was initially notified of a hit-and-run crash in the area of Road 1 West and Road 1 North at about 1:54 p.m., according to a CVPD news release. The fleeing vehicle was described as a white Chevrolet SUV.

While driving to the scene, officers were told the same SUV had struck another vehicle and run over a street sign while entering the Safeway parking lot along Highway 89, the release states.

One of the victims followed the SUV to the 1300 block of Stratford Place in Chino Valley, where officers responded shortly after.

They found 37-year-old Chino Valley resident Linda Rodkey seated in the driver’s seat of the SUV with the keys in the ignition, the release states.

Rodkey admitted she had struck a vehicle, but refused to submit to standard field sobriety tests, according to the release. She was taken into custody for suspicion of DUI and submitted to both a breath and blood test. The tests showed her blood alcohol concentration (BAC) to be 0.401 – more than four times the legal limit.

“Chino Valley Police Department would like to thank the citizens who called in and assisted with us locating this driver,” CVPD spokesperson Randy Chapman said in the release.