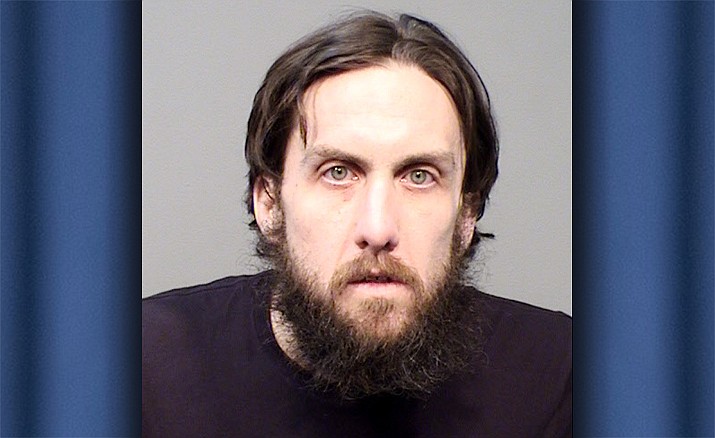 Jonathan Breninger, 34, of Prescott, was arrested and booked into the Yavapai County Jail after breaking into a Prescott bookstore and attempting to steal a cash box, among other items. (Prescott PD/Courtesy)

Jonathan Breninger, 34, was arrested and booked into the Yavapai County Jail after breaking into a local bookstore and attempting to steal a cash box, among other items, according to a Prescott Police Department release Monday afternoon.

Officers responded to a call of burglary alarm and arrived on scene at the Prescott bookstore on the 200 block of Cortez Street around 4:40 a.m. Monday. They discovered the back door of the business was open and found a cash box in the alley in addition to other items that were later determined to be from the business.

A few minutes later, a man was observed approaching their location in the alley. As the officers shined their flashlights on the subject and identified themselves as police officers, he fled on foot.

Officers chased the suspect and after a short distance, were able to catch him. The subject then admitted that he had just burglarized the book store and that he was a former employee.

The suspect was later identified as Breninger, a Prescott resident.

During the burglary, Breninger was injured after using a hammer to break out a window where he gained entry into the business. He was treated on scene by the Prescott Fire Department for minor injuries and released into police custody.

Breninger was transported back to Prescott PD where he was interviewed by detectives and then booked into Yavapai County Jail on burglary and criminal damage charges.