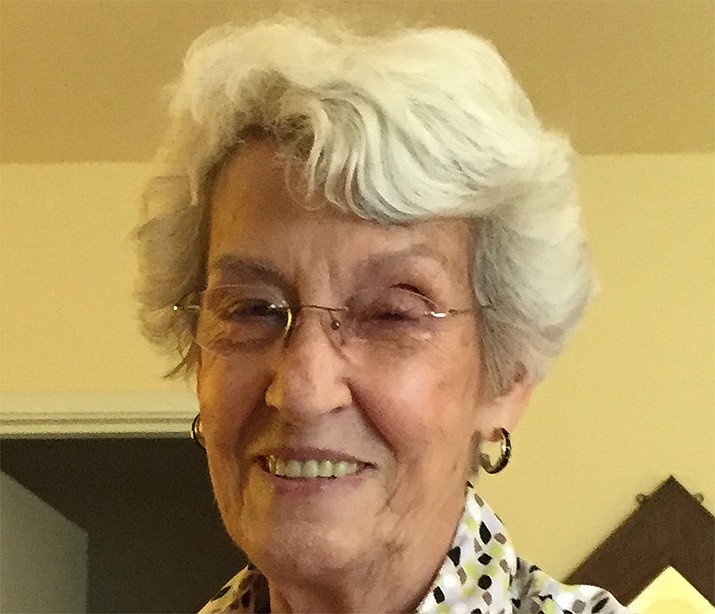 Joan Miday Krauskopf died Sept. 15, 2019 at the age of 87, in Prescott, Arizona at Las Fuentes Village where she has resided for five years.

Joan and her husband, Charles Krauskopf moved to Prescott in 1997 after they both retired as Professors from The Ohio State University.

Joan “Jo” Miday was born on April 24, 1932, in Canton, Ohio, where her father was a letter carrier and her mother was a seamstress and store clerk. Joan was an academic standout even from grade school. She competed in varsity debate in high school, bringing home individual and team awards at McKinley High School where she graduated as valedictorian. Interviewed by the school paper at 16, she said, “I realize not many girls have made a success of a law career, but I’m sure going to try.”

Her academic success won her a scholarship to Ohio University in nearby Athens, Ohio, where she studied History, joined the Alpha Delta Pi sorority, and continued her success in debate competitions. Her sophomore year, she met the love of her life, Charley Krauskopf, as he arrived as a guest on the campus radio show she hosted.

The next year, they both were elected to student government and her senior year Joan was elected as President of the Women’s League on campus. Charley graduated and shipped out for the Navy that year (1953-54) but they were able to arrange their wedding right after Joan’s graduation during his ship’s July 4 leave at the San Diego naval base.

Joan entered law school at UCLA while Charley continued at sea, but after one more year, they both were able to attend Ohio State at the same time, where Joan finished her long-planned law degree (and Charley finished his PhD). From her law graduation in 1957 to 1972, she struggled to be taken seriously as a woman lawyer, moving to Boulder, Colorado and then Columbia, Missouri, where Charley had academic appointments. All she could get was part-time law school teaching appointments.

In Missouri, it took her over 10 years to convince the law school at the University of Missouri to hire her as a full-time professor (first woman professor, one of the first women law professors anywhere with tenure) and another 5 years to be allowed to teach Torts, seen as a man’s area of the law.

Now, the university counts her as one of their most distinguished professors ever. She served on the Missouri Commission for Human Rights, was active in the ACLU, the National Organization for Women (NOW), and the efforts to pass the Equal Rights Amendment (ERA) in Missouri.

In 1979 she received national notoriety as she was nominated by President Carter to fill a spot on the 8th Federal Circuit Court of Appeals, supported by the Governor of Missouri, and countless recommendations, but opposed by the all-male American Bar Association review panel, and then had her nomination rescinded. Joan’s last 10 years of her career were at The Ohio State University, where she published articles and books on Family Law and legal protections for the Elderly.

Joan’s two children, Tim and David, were born and raised in Missouri on their parents’ self-proclaimed “lousy farm”. Joan and Charley designed the house for the property and raised dogs, cats, hay, and horses.

Summers every year were spent in Michigan on the rustic family property that provided her the chance for R&R and sometimes some research reading. Traveling with the whole family was a common pastime, but travel kicked into high gear when the kids went off to college. From Chile to Tibet, Russia to Africa, Chaco Canyon to Iceland, Joan was fascinated by the whole world and every kind of people and culture in it. For a few years, travel concentrated on exploring Belize where they helped their son buy property and start up a resort.

Love of the west, mountains and Native American cultures brought Joan to Prescott in 1987, where she explored, camped and backpacked the Grand Canyon rim to rim, volunteered at the Smoki Museum, and saw many prehistoric native sites with the Arizona Archaeological Society. She continued to teach subjects about Native Americans and mentor youth throughout retirement. Joan was active in the Granite Peak Unitarian Universalist Congregation, especially book groups, as she loved to read most of all.

A service to celebrate Joan’s life will be at 2:00 p.m. on Sunday, October 20, 2019 at the Smoki Museum Pueblo, 147 No. Arizona Ave. The Museum is on Arizona Ave, south of Gurley across from the Ken Lindley Playing Fields.