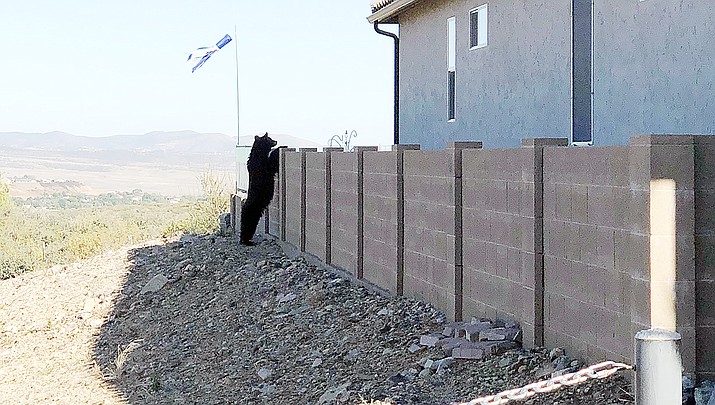 A black bear looks over a block wall in the StoneRidge subdivision of Prescott Valley, Wednesday, Oct. 9, 2019. (Houston Spaulding/Courtesy)

A juvenile black bear has been making the rounds of Victorian Estates, Diamond Valley, and now the StoneRidge subdivision.

“This juvenile is looking for its area. If we make it hard for it, it won’t stay around,” Yogerst said.

The most recent sighting of the bear was Wednesday, Oct. 9, in the StoneRidge subdivision. It was seen and photographed going through yards, fields, and peeking over block walls.

StoneRidge resident Lester Dixon shared with the Prescott News Network some photos taken by Houston Spaulding, who gave permission to publish them, of a black bear seen roaming in the StoneRidge area of Prescott Valley. Dixon said that the photos were taken on Oct. 9 at about 4 p.m. He said that there were numerous sightings of the bear during the past week.

Dixon noted that black bears are not usually aggressive unless threatened or surprised, and he hopes that the bear is just passing through. “If not,” he said, “I hope our Animal Control experts will be able to capture and relocate the bear.”

Yogerst said bears typically go into hibernation in late October and early November. “They’re looking to gain weight … (often) as much as 3 to 4 pounds a day” to get ready for their winter nap.

The bear, which is frequenting the Lynx Creek area, was first seen in the subdivisions at the beginning of September, he said. It has also been sighted near Fain Park early in the morning, and then went back through Victorian Estates to the Diamond Valley area.

“Game and Fish has set up a trap, trying to relocate it,” Yogerst said, adding that having been unsuccessful, “they’re re-evaluating, trying to figure out its habits.”

Officials with Game and Fish were unavailable for comment.

To also deter the bear and for safety, Yogerst said, do not let pets run loose.

“We warn of bobcats, mountain lions and coyotes, and now we have a bear,” he said, adding that some people do not believe him. “We have photos!”

THEY CAN COME BACK

Yogerst added that Game and Fish wants to relocate it; however, they can come back.

“The last one they took to the Kingman area – over 130 miles away,” he said. “It made its way back in 12 days. Their inner compass is amazing.” 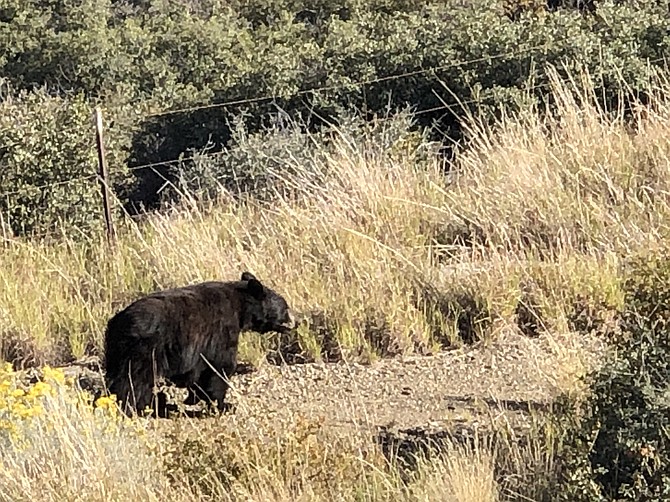 Reader Lester Dixon shared with us some photos taken by Houston Spaulding of a bear seen roaming in the StoneRidge area of Prescott Valley. Dixon said that the photos were taken on Wednesday, Oct. 9, 2019 at about 4 p.m. (Houston Spaulding/Courtesy)

The Arizona Game and Fish Department offers some advice if you encounter a bear in your neighborhood.

"First, never approach a wild bear. Black bears usually avoid people, but if they start to associate people with food they may become aggressive. If a bear is in your yard or neighborhood, immediately contact the Game and Fish office in your area. Depending on what the bear is doing, department personnel may respond if it remains in the area. Deter the bear by making loud noises, such as yelling, whistling or banging pans."

To reach Game and Fish, call 928-692-7700, which is the Region III Kingman phone number. The main number in Phoenix is 602-942-3000. If you’re calling after regular business hours, dial local law enforcement and ask for Animal Control.

Click HERE to read the initial story about the bear.