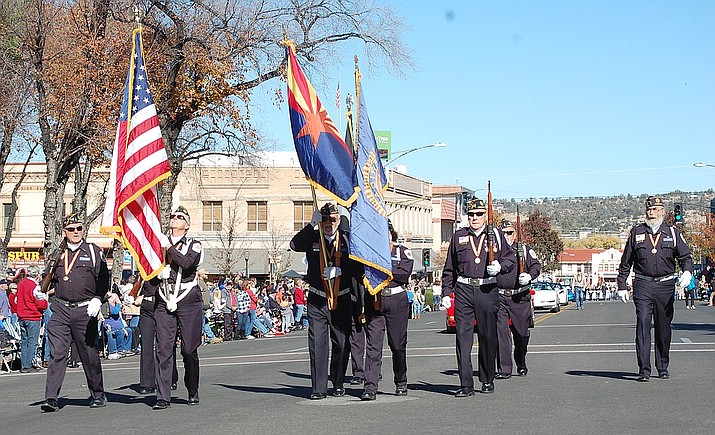 Five distinguished local veterans of the Korean War are slated to lead the annual Veterans Day Parade scheduled to take place in downtown Prescott this year.

The City of Prescott announced this week that the annual parade will take place on Monday, Nov. 11. Opening ceremonies will take place at 10:30 a.m. on the stage at the intersection of Cortez and Union streets, with the parade beginning at 11 a.m.

The city is seeking parade entries in seven categories.

Past parades have honored hometown heroes, the five branches of the military and female veterans. Michelle Stacy-Schroeder, recreation services manager for the City of Prescott, noted that this year’s parade will focus on veterans of the early-1950s Korean War.

The five grand marshals — all local mean in their 80s — include:

• John McKinney, who served as a staff sergeant in the U.S. Marine Corps. McKinney, the current commander of the Korean War Veterans Association-H. Edward Reeves Chapter 311, is a Purple Heart recipient who served at the Battle of Heartbreak Ridge. McKinney, 89, has been a resident of Prescott since 2004.

• George Thyden, 88, who retired as a major in the U.S. Marine Corps. He currently serves as the 1st vice commander of the Korean War Veterans Association-H. Edward Reeves Chapter 11. Thyden lives in Chino Valley.

• Jack Palmer, who served as a corporal in the U.S. Marine Corps. Palmer currently serves as 2nd vice commander of the Korean War Veterans Association-H. Edward Reeves Chapter 311. He is a resident of Prescott and is 85 years of age.

• Chuck Stohr, 83, who served as a sergeant in the U.S. Marine Corps. He is a past commander of the Korean War Veterans Association-H. Edward Reeves Chapter 11, and is a resident of Prescott.

“The City of Prescott is inviting parade entrants from the community to compete in seven categories this year,” states a news release from the city. “Each entry category will have a first- place winner, and all entries will compete for a best-overall award.” 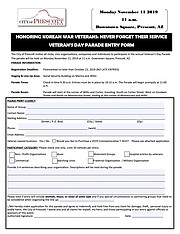 There is no fee to enter, and application forms and rules can be found on the Recreation Services section of the City website, under the Programs and Special Events tab, or at this prescott-az.gov link.

A downloadable application form has also been included with this posted story.

Individuals, businesses and groups interested in participating in the parade are asked to return their entry forms no later than Oct. 22, to assure proper staging and information prior to the event.

Questions or completed applications should be directed to Stacy-Schroeder at 928-777-1552.