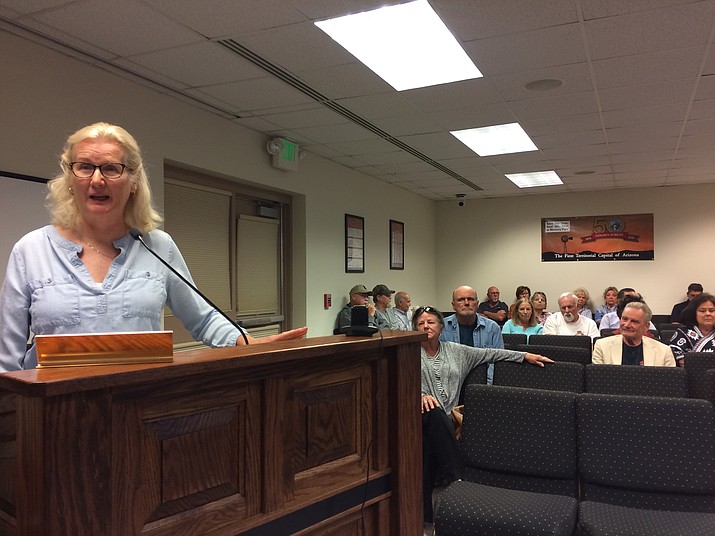 Tina Harmon voices her opposition to the proposed Brook Apartments and the proposed zoning change to allow them at the Tuesday, Oct. 1, Planning & Zoning Commission meeting. (Jason Wheeler/Review)

Calling himself the future of Chino Valley, Nick Sallee, 19, said he was opposed to the proposed Brook Apartments and the proposed zoning change to allow them.

“I was the one that encouraged the purchase of this home, chose this home because of the current zoning and its low crime rate,” Sallee said of his residence on Grove Lane south of the proposed development. “I wanted to live on a street that is safe and has a little more space than my former home. We drove through the area and noticed that there are no apartments in sight. I’d like to keep it that way.” 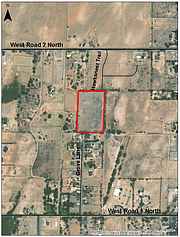 The location of the proposed Brook Apartments. (Town of Chino Valley/Courtesy)

Should the zoning change and the apartments go up, he said he would not be able to enjoy taking photos of the natural environment because they would block the surrounding view and be an eyesore.

If approved, the zoning would change about 6.85 acres located 14,000 feet west of Highway 89 and 620 feet south of West Road 2 North from multi-family residential one-acre minimum to multi-family residential one-acre minimum with a Planned Area Development, allowing for the development of four apartment buildings with 38 units each, Town Planner Alex Lerma said.

This is not the first time the project has appeared before the town, he said. It went before council in 2006, receiving approval for a request to rezone the property from agricultural/residential five-acre minimum to multi-family residential one-acre minimum and was subdivided to separate the blended zoning on the property later that year, Lerma said.

Additionally, in 2018, the Planning & Zoning commission forwarded the Chino Valley Town Council a recommendation of denial for a previous version of the project that would increase the allowed density from 99 to 192 units, he said. The applicant withdrew the application before council could take action, Lerma said.

Jean McFadzen said the land for the project was once owned for assisted living before it became a project with four buildings three stories tall.

“Now the plan is for 152 apartments in two- and three-story buildings with up to four bedrooms,” McFadzen said. “Fewer apartments, more bedrooms. Same issue, density. Nothing has changed.”

While none of the residents would object to reasonable transitional housing or light commercial growth along Road 2 North and Highway 89, there is nothing compatible about two- and three-story buildings next to single story large lot homes, she said.

They object to the density looking into their backyards, McFadzen said.

The return of the project is not an improvement from last year’s plan, said resident Tina Harmon. With the previous plan allowing for 288 bedrooms and the updated plan allowing for 316 bedrooms, it’s denser, Harmon said.

“Brook Apartments will be the densest parcel in Chino Valley,” she said. “Approval of this zoning will change and we’ll be setting a precedent for Chino Valley.”

Larry Holt said he’s watched the project closely for the last two years. Identifying himself as having been a police officer for 32 years, 12 of which were as a chief in a rural community similar to Chino Valley, Holt said they had a lot of one-acre single-family residences and after moving apartments into the community, the crime rate soared.

There are benefits the Town of Chino Valley would enjoy if the project is approved, Development Services Director Joshua Cook said. Currently, water and sewer are not extended to the property and end on the west side of highway 89, Cook said.

“The developer will be extending the water and sewer down Road 2 North, which would allow for future connections for additional commercial, multi-family and single-family residences,” he said. “It would provide apartments, which is something our town sorely needs.”

Further, in researching crime in the community, town staff found that in the last six months a majority of the crimes that have occurred in Chino Valley have been on the east side of Highway 89, Cook said. None of them happened at the locations of apartments and most of them were in some of the subdivisions, RV parks and mobile home parks, he said.

The Planning & Zoning Commission voted 4-3 for a recommendation of denial to the Chino Valley Town Council, with commissioners Robert Switzer and Teena Meadors, Vice Chairman Tom Armstrong and alternate David Somerville voting for the recommendation.

“I feel that it does not conform to the current (Unified Development Ordinance),” Switzer said. “I also feel that its current zoning is proper density for the (multi-family residential one-acre minimum) designation, which it’s already set at.”

It also does not meet the strategy for protecting existing residents in large lot neighborhoods, and there are fire safety issues as well, he said.

“I see how crumbly the asphalt is in that area, and it would be probably do 10 times more damage to the road if you have more people and traffic,” Somerville said, adding he is also concerned with property values for the surrounding area.

“When you’re building a house, you want to know how much value your house is going to be, as well as the property, and if something happens to change the ambiance of the area, the property values are going to go down.”