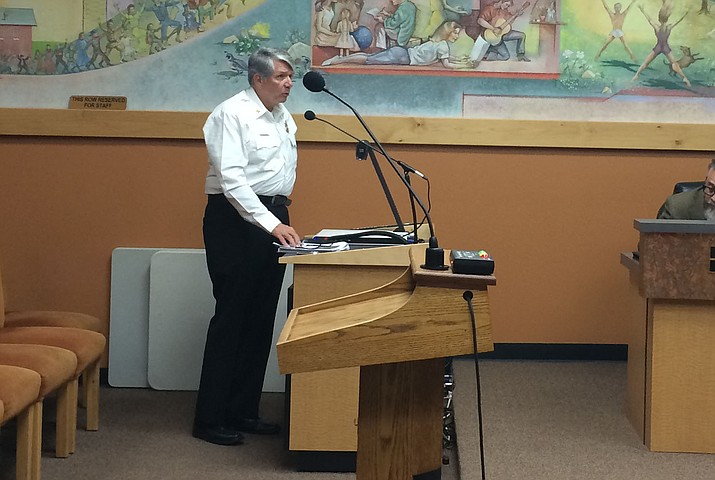 If a basement blaze erupts in the middle of the night, the Prescott community needs to be confident its Fire Department is at the ready to do what needs to be done to protect their lives and property.

Just as important, each and every city firefighter and leader needs to be confident this department is at the top of its game so the citizenry’s confidence never falters.

With those incentives in mind, Fire Chief Dennis Light more than a year ago started a voluntary process that only 5 percent of departments in the nation pursue — national accreditation. The process has been a goal of Light’s for at least the last five years.

On Tuesday afternoon, Light shared with the Prescott City Council members during a study session the rationale behind this pursuit, one intended to be a “road map” for growth and continuous improvement rather than simply a quest for dollars. Of course, some council members suggested that with the city’s growth the department may require more resources so as to be able to respond to the height of national standards.

At this time, Light admitted, department response times tend to be about four seconds longer than the national average based on the city’s geography. Still, the department’s on-scene performances, be it to a medical emergency or fire, are saving lives and property, he and council members concurred.

“Everything we do is a race against time,” Light said.

The accreditation process is all about looking at the department’s strengths while offering constructive critiques on how best to progress and shore up areas that do not yet meet best practice standards, Light said. He noted Prescott’s performance will be evaluated in context to what makes sense for this city, he said.

Light said he can gush all day over the department’s importance and high stakes role in the community, but an evaluation from national third-party experts in the field — the Commission on Fire Accreditation International — will offer a “deep dive” into virtually every aspect of the department. 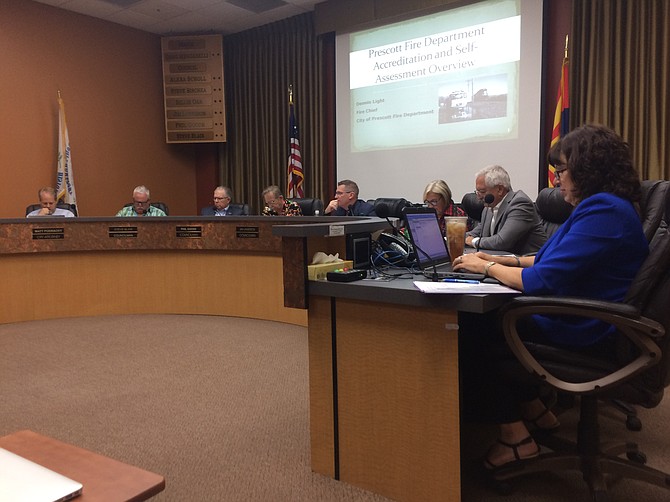 An accreditation peer review team will be in Prescott at the beginning of November with notification of accreditation with its subsequent report findings expected in March 2020. Those findings will be a guide that helps the city move forward such that the department meets national “best practices” in key areas, Light said.

Accreditation recommendations do not dictate fiscal policies, or timeframes for when certain things should be done, but rather give legitimacy to department requests rooted in meeting national standards, including manpower, equipment, training or other operational and administrative responses, Light suggested. Some recommendations may also include collaborations with other entities and agencies, he noted.

Once the report is in hand, the chief said, the department can then begin the “stair-step method to get where we need to be.”

This type of accreditation will ensure the department is operating at the “platinum standard,” Light said.

The expected cost is an initial $8,000 with the team review, and about $1,000 a year. The accreditation lasts for five years.

Mayor Pro Tem Billie Orr added she is an advocate of “continuous improvement,” and sees this as a way for the department to review its model and hear from experts on how to make modifications so that the department knows what it needs to be successful for future Prescott generations.

“This is a lot of hard work, and it seems to me like it will soon pay off,” concluded Council member Phil Goode.

In other business, the council Tuesday voted unanimously to approve a more than $10 million contract to Fann Contracting Inc. to build what is touted as the city’s largest, and most complex, sewer project that will connect with two earlier phases.

This particular sewer main that will begin at the Peavine Trail and move south underneath Highway 89 A without disrupting traffic was described as the “most important in our entire inventory.”

The council, too, voted to approve the negotiated settlement with Hidden Heights that ends the subdivision’s lawsuit for $3.5 million with a guarantee of city water for just under 40 lots.

The council also voted for the renegotiation of some municipal bonds to a lower interest rate expected to generate some $1.4 million dollars for the city over the next 10 years that can then be allocated to street repairs.