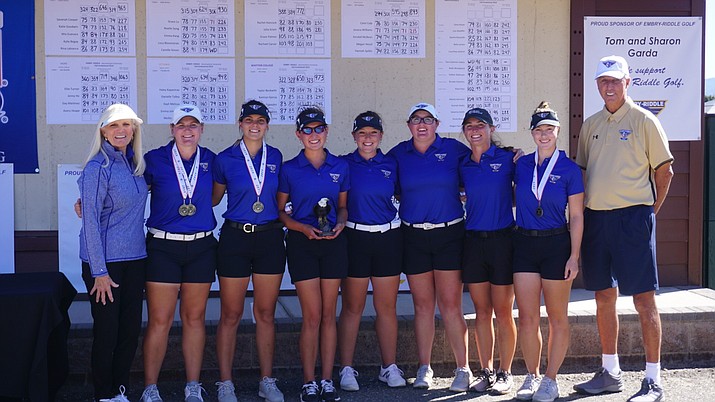 PRESCOTT — Playing on one’s home course obviously has its advantages.

For Embry-Riddle golf, that surely came into fruition at the ERAU Co-Ed Invitational on Monday and Tuesday as the women’s team claimed first while the men’s team placed third.

The women’s team has been on another level this season. Before swarming the leaderboards at the seven-team ERAU Co-Ed Invitational, the Eagles won the Lewis-Clark State College Invite out in Idaho last week.

In a return to their home course at Antelope Hills, the Eagles did what they had to do to defend their nest by taking three of the top five spots. They also had five golfers finish within the top 15 for a total team score of 893 (+29) through three rounds. This effort was 37 strokes better than second-place Claremont Mudd Scripps.

While the men didn’t strike gold like their female counterparts, they put up a respectable effort by finishing third out of nine teams. Through two rounds, the Eagles notched a score of 583 (+7), which fell short of first-place Claremont Mudd Scripps’ 568 and second-place Arizona Christian’s 575.

The women will be back for the final round of the NAIA National Championship at Lincoln Park Golf Course in Oklahoma City on Monday, Oct. 14.

The men, however, will have to wait until November for their next match as they compete in the Fall National Preview at Las Sendas Golf Course in Mesa from Nov. 4-5.