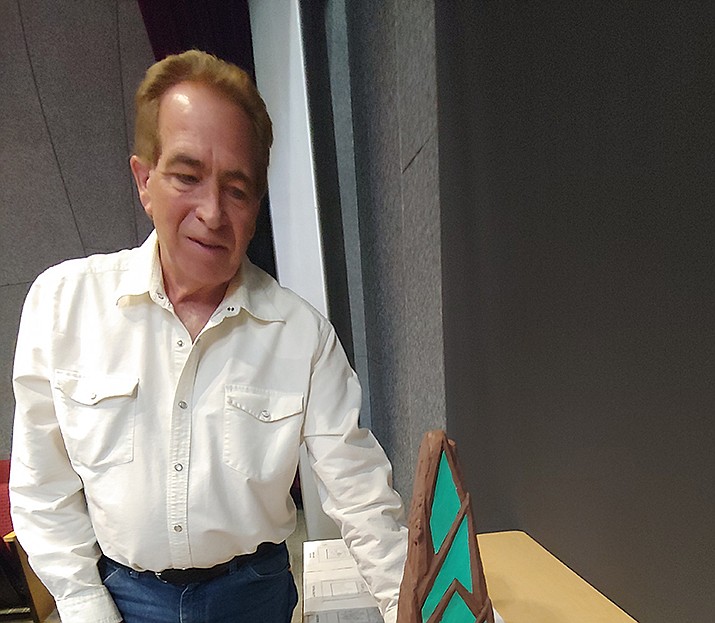 Sick and tired of hearing that noise and feeling your vehicle’s tires run over all of those pesky cracks on StoneRidge Drive heading into the subdivision on Prescott Valley’s west side?

During a Prescott Valley Town Council study session Thursday, Oct. 3, at the library auditorium, council heard a presentation from Public Works Director Norm Davis, who thinks his department may have finally solved the problem.

As part of its annual pavement maintenance schedule, the town on Sept. 12 bought two semi-truckloads full of a modernized crack sealant, which will serve as a tune-up for the road’s future resurfacing. That’s 22 pallets per semi of the gooey stuff that’ll be used on 4 miles of roads.

Davis said the thick, black sealant from Chandler-based Crafco is molded into big, solid bricks, which are packed one apiece into cardboard boxes. The sealant consists of epoxy with an aggregate.

“After getting bids from contractors, I hope you move to approve the contract at your next meeting [Oct. 10],” said Davis, citing the town’s $57,500 bid from Maricopa-based CBJ Asphalt & Concrete Contractors to pour the crack seal.

A StoneRidge resident said she counted 152 cracks on StoneRidge Drive — traveling one way on the four-lane divided street.

“We’ll top each crack for a better ride and take care of the thumpety-thump,” Davis added.

Pending council approval, crack seal work would begin Monday, Oct. 21, and be finished by Dec. 5. All residents and businesses in town that will be affected by the crack seal will be notified in-person before any work begins.

During the summer of 2020, Prescott Valley plans to prep the intersection at Highway 89A and Robert Road for chip sealing (gravel and tar poured over the crack seal).

Historically, Prescott Valley Town Council candidate packets for the primary and general elections have been available at the beginning of each election year.

Not so for the challengers in 2020, however. Next year’s election was moved forward by several weeks, meaning council candidate packets arrived at Town Clerk Diane Russell’s office on the second floor of the Civic Center, 7501 E. Skoog Blvd., on Monday, Oct. 7.

In 2020, four of the Town Council’s six seats will be contested. The seats include the ones council members Marty Grossman, Lora Lee Nye, Lori Hunt and Richard Anderson currently hold.

IN OTHER BUSINESS, Council:

• Heard a presentation from the Prescott Valley Arts & Culture Committee regarding a proposal for a Lakeshore Plaza sculpture at the southeast corner of Lakeshore Drive and Skoog Boulevard.

Bronze Smith Fine Art Foundry & Gallery owner Ed Reilly developed a model for a 19-foot-tall obelisk with four different themes represented on each side, including Mining and Railroads, Ranching, Natural Beauty (depicting San Francisco Peaks and Fain Lake) and The Future. A bench would rest at the 34-inch concrete base of the tan obelisk, where people could sit and look at the piece.

“The [turquoise] colored Plexiglass brings focus to the town center,” Reilly said of obelisk’s side representing The Future. “It’s also a snapshot of history, growth and planning.”

If approved by Council, the obelisk would cost $110,000, but the Committee says it’s considering all funding options at no cost to the town. Work on the sculpture would continue into 2020 and 2021 if that’s the case.

• Considered a campaign called “Honoring Our Heroes,” which would celebrate active military members from Prescott Valley by raising color banners with their photos atop light poles in town. Local businesses would sponsor the 4-foot by 8-foot banners, but council still needs to vote on the proposal.

• Saw a preview from I.T. Director Casey Danner regarding the Town of Prescott Valley’s new revamped website, which undergoes a free redesign every four years. A company called Civic Plus hosts the website, which is simpler and more user friendly.