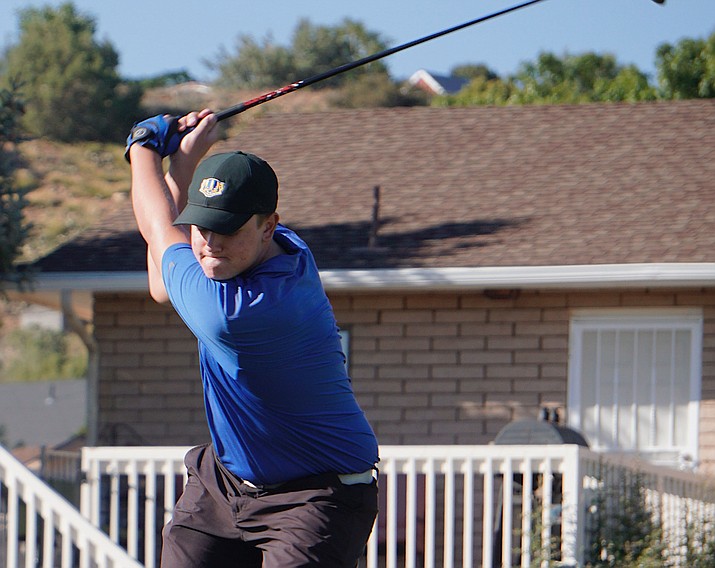 Prescott golf’s Cademon Buettner tees off on the eighth hole during the team’ match against Bradshaw Mountain and Coconino on Tuesday, Oct. 8, 2019, at Prescott Golf Club. (Aaron Valdez/Courier)

PRESCOTT VALLEY — Prescott boys golf is having one of its better seasons in program history and is now on the fringes of qualifying for playoffs with their latest win over Bradshaw Mountain and Coconino on Tuesday at Prescott Golf Club.

The old saying of “eyes on the prize” has never held such prominence during a Prescott golf season. Head coach Dan Osterloh said this is the highest the Badgers have ever been ranked as Tuesday’s win moved them into No. 10 in the state.

This is just enough to qualify them for the state match as only the top 10 teams make it. As long as the Badgers perform well in their final three matches of the regular season, it is very likely they will qualify.

Heading into the match, Bradshaw Mountain was exempt from submitting a final score as they didn’t have enough players competing. This basically reduced the match to a two-team competition between Prescott and Coconino.

Nevertheless, the Badgers fended off a solid effort from Coconino, taking the match with a 154 (+10) score while the Panthers shot a 158 (+14). This marked Prescott’s best score of the year.

Prescott senior Carter Libis was locked in, leading the field with an even par score on the front nine. Coconino’s Jackson Hammond finished second with a 38 (+2) while Prescott’s Hill and Nicholas Ruhrer tied for third with a 39 (+3).

“Having three birdies I kind of wanted to go under par, but having three bogeys equaled it out so now I just got to keep grinding,” said Libis, whose even par score on Tuesday was his best this season.

Rounding out the Badgers’ top five were sophomore Brent Chambers (+40) and junior Cademon Buettner (+12), who finished in seventh and 12th, respectively.

Prescott will have another region match against Mingus and Mohave on their home course at Antelope Hills Tuesday, Oct. 15. Tee off is set for 3 p.m.