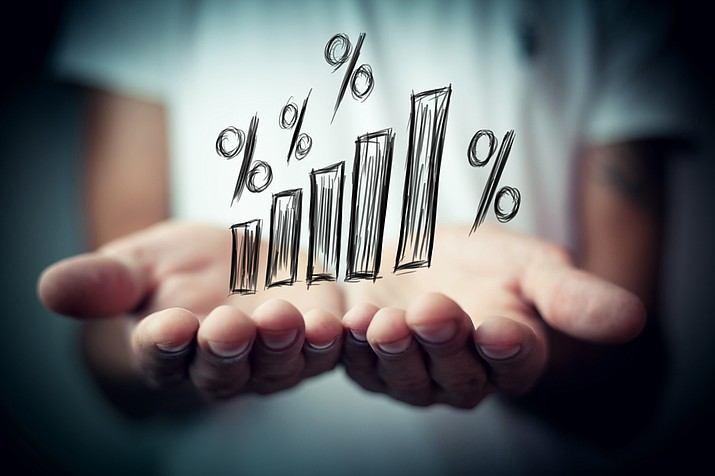 Calling it a “stand against socialism,’’ a proposed constitutional amendment would give banks, finance companies and other lenders free rein to charge whatever interest rates they want to Arizona customers. The initiative being pushed by the National Credit Alliance, would overturn virtually all laws that now limit annual interest charges to 36 percent. (Courier stock photo)

PHOENIX — Calling it a “stand against socialism,’’ a proposed constitutional amendment would give banks, finance companies and other lenders free rein to charge whatever interest rates they want to Arizona customers.

The initiative being pushed by the National Credit Alliance, would overturn virtually all laws that now limit annual interest charges to 36 percent.

“I think that’s a market decision,’’ said Sean Noble, the campaign manager of the ballot measure. “If you can find somebody to give you a lower interest rate than somebody else, then that should be a competitive marketplace.’’

If approved at the 2020 election it also would override another ballot proposal to cap interest rates on title loans.

But the measure would have much more far reaching implications.

It would put a provision into the Arizona Constitution to bar state and local governments from prescribing, limiting or otherwise regulating any prices for any private transaction. That would preclude not just future price caps but overturn some existing laws, like a 2018 measure that prohibits credit reporting agencies from charging fees anytime someone wants to freeze or unfreeze their credit.

It also could undermine laws that limit the ability of towing companies to refuse to release a vehicle because the owner does not pay.

And any other existing law that sets limits on what private companies can charge customers would be summarily wiped off the books.

As crafted, the measure would leave untouched the 2016 voter-approved law requiring private companies to pay their workers $11.50 an hour, a figure that goes up automatically next year to $12. But it would make future ballot measures to alter wages unconstitutional.

Noble is the president and founder of American Encore, the successor group to the Center to Protect Patient Rights which was financed by the Koch brothers.

“We need to take a stand against socialism,’’ Noble told Capitol Media Services about the proposal.

“The entire message of the Democrat Party this cycle is drifting more and more to the Left,’’ he said. “This is an attempt to have that great debate between economic freedom and free markets and socialism.’’

Noble acknowledged a state constitutional amendment would not shield Arizona from anything occurring on the national stage and any federal laws that may be enacted. But Noble said that this measure would help protect Arizona from the kind of changes in state law that he said have been proposed at the ballot for the past few years or are pending now.

Chief among them is a proposal that some groups hope to get on the ballot in November to cap the interest rates that can be charged by title loan companies at 36 percent. Current title loans can carry an annual percentage rate up to 204 percent a year.

If both measures were to qualify for the ballot and get voter approval, the title loan measure would not take effect, as constitutional provisions trump statutory changes.

That fact did not go unnoticed by those seeking to curb title loans.

“This is a radical money grab by out-of-state loan sharks,’’ said Rodd McLeod, campaign consultant for the title loan measure. He also called it unprecedented.

“We’ve had usury laws in this country for hundreds of years,’’ McLeod said, including in Arizona. “That’s because people want to make sure that loan sharks can’t charge any interest rate they want.’’

To date, Noble’s campaign to change the Arizona Constitution, operating under the name of Arizonans for Financial Freedom, has not publicly listed any sources of its funding. Noble did acknowledge that the money spent so far to craft the measure comes from the National Credit Alliance which he describes as a professional organization based in Ohio representing banks and other lenders in Arizona and elsewhere.

It will take a fair amount of money to hire the paid circulators to put the measure on the 2020 ballot. Backers need 356,467 valid signatures on petitions by July 2 to qualify. Then there’s the cost of a campaign. There are some exceptions to what would be covered.

One thing that would remain untouched is Arizona’s ban on “payday loans,’’ a form of short-term lending that can carry interest rates higher than 400 percent that used to be legal here. Noble said that was intentional, pointing out that Arizonans went to the polls in 2008 and voted to kill off that industry.

“To the extent we can we want to appreciate where voters have spoken,’’ he said.

The measure also would not affect the ability of the Arizona Corporation Commission to set the rates that utilities can charge their customers. Tax rates also would not be subject to the constitutional provision, with an exception for regulations “reasonably necessary to remedy a public emergency.’’