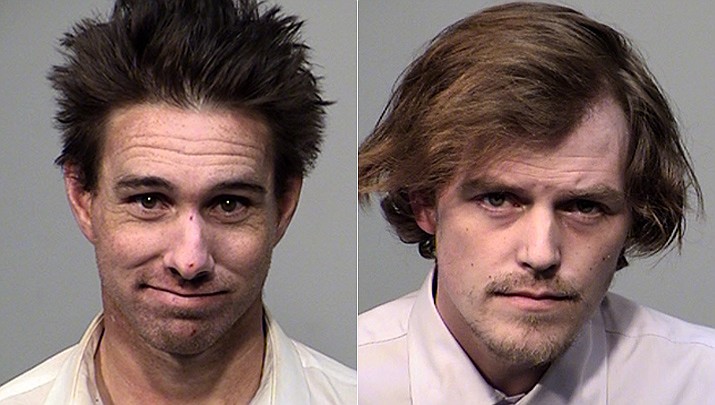 Prescott police, with help from Partners Against Narcotics Trafficking (PANT) detectives, on Sept. 22 arrested two Prescott men and seized a total of 144 mimic Xanax pills, 11 grams of methamphetamine, 15 grams of a white powder testing positive for fentanyl, and more. 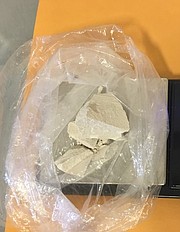 White powder, known on the street as "China," that tested positive for fentanyl, seized Sept. 22, 2019, in a drug bust by Prescott Police and Partners Against Narcotics Trafficking. (Sheriff's Office/Courtesy)

Prescott officers were dispatched to a disturbance at a business on Sheldon Street on Sept. 22 and contacted 33-year-old Brendon Ross and 32-year-old Robert Hogan, both Prescott residents. During the interaction with Hogan, officers found a syringe containing methamphetamine and after his arrest, a half gram of methamphetamine and 20 mimic Xanax pills were found on his person, an Oct. 5 news release states. Inside a metal box Hogan was carrying, officers found 15 more mimic Xanax pills. Ross was found with five mimic Xanax pills and also arrested.

PANT detectives were contacted and both suspects were known to PANT investigators, the Yavapai County Sheriff’s Office reported for PANT. One of the seized pills tested positive for the presence of fentanyl. During an interview with Ross, he admitted buying pills in order to sell, the YCSO said. Detectives noted he was under the influence based on several symptoms including difficulty staying awake during the interview. Hogan admitted to possessing some of the pills, which Ross had given to him.

Both suspects were staying at a residence in the 300 block of South Virginia in Prescott and detectives developed probable cause more illicit drugs would be found there. A search warrant was obtained and served due to the urgency to remove the dangerous narcotics from the street. Detectives seized the following as a result of the search: a total of 144 mimic Xanax pills, 11 grams of methamphetamine, 15 grams of a white powder testing positive for fentanyl, syringes containing methamphetamine and fentanyl residue, scales, empty bindle packaging used in drug sales, and a loaded handgun belonging to Ross. 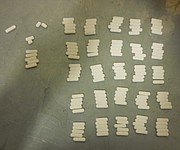 “PANT detectives have learned that drug dealers are commonly referring to straight powdered fentanyl as 'China.' This is a dangerous misnomer, as those purchasing the drug might be led to believe that they are buying 'China White' heroin. Fentanyl looks nearly identical to 'China White' heroin and it can easily be confused as such.

“Fentanyl pressed mimic pills in the form of Xanax and other prescription pills are being seized regularly around the county. As mentioned in previous press releases, these mimic pills can be lethal and are responsible for numerous overdoses in our communities. We urge the public not to take any pill unless they obtained that pill at a legitimate pharmacy and that pill is prescribed to them. One pill could be the last.”

Additional charges were added to the booking information for each suspect – they are as follows:

Information provided by the YCSO on behalf of Partners Against Narcotics Trafficking and Prescott Police.