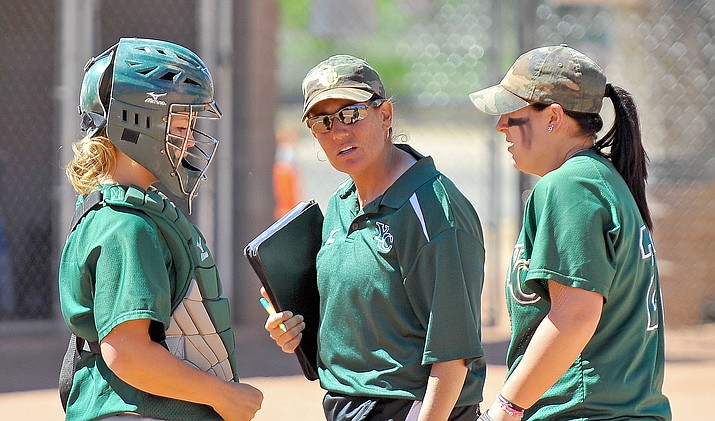 Head Coach Stacey Iveson talking with pitcher Alex Landon (22) and catcher Ashleigh Seipl (8) after Landon gave up six runs in the second inning of a game against Pima on April 26, 2011. (Courier File Photo)

PRESCOTT — Becoming a hall of famer, no matter at what level, is undoubtedly one of the highest honors an athlete can earn. And on Saturday, Oct. 19, a player, two coaches and a softball team will be inducted into Yavapai College’s 2019 Hall of Fame.

Yavapai’s Hall of Fame inductions are relatively young, having only been in existence since in 2012. Inductees will be honored at a brunch, which will take place during the college’s inaugural homecoming weekend. The brunch will be held at 11 a.m. at the Hotel St. Michael in Downtown Prescott.

“I think this is huge to the community and the college. We have such a strong history with athletics and student-athletes here at Yavapai College who when we go back 50 years, we’ve had the likes of professional baseball, soccer, and basketball players,” said Brad Clifford, athletics director at Yavapai. “It’s just a great tradition so I think it’s a big honor considering the amount of success we’ve had here at Yavapai College.”

Tickets for the brunch, as well as the complete list of homecoming activities can be found online at yc.edu/homecoming.

Iveson was hired to guide the ship of a softball program that was just re-introduced to the college. She immediately made an impact as in the first two years, the Roughriders won two consecutive Division I conference titles and made two trips to the NJCAA World Series.

In its second trip to the World Series, the team won its first four games to set up a match-up with Wallace State in the title game. Wallace State won the first leg of that title match to force a second game but Yavapai grinded out a 2-1 victory to clinch their first-ever National Championship. The Roughriders finished that season with 60-8 record.

The roster is as follows:

“It was fun and I felt really good about the product we put on the field. We had a really good team obviously, but I think we were able to provide a great service to the student-athletes by getting them a great education at Yavapai and getting the opportunity to compete for a national championship,” Iveson said. “It was really fun time and I think it was a really great time for the girls.”

Since her stint at Yavapai, Iveson went to coach at the University of Arizona, her alma mater. It was actually her second stint coaching at Arizona, which lasted seven years. Three years ago, she then became the director of recruiting operations for the Wildcat softball team.

Hanks only went to Yavapai for one year but she made the best of it. The women’s basketball player helped lead the team to its first and only NCJAA National Tournament appearance. In that lone season, Hanks was named ACCAC Co-Player of the Year, becoming the first Roughrider to ever do so. She was also selected to the First Team All-ACCAC/Region I, NJCAA All-Tournament Team, NJCAA West Squad Member, NJCAA Honorable Mention All-American and Kodak All-West Region Team. 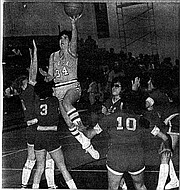 After her one year at Yavapai, she transferred to Northern Arizona University where she continued to flourish on the court. In 1985-86, Hanks was named NAU’s Female Athlete of the Year and eventually became the Lumberjacks’ all-time leading scorer.

Her efforts were good enough for an induction into NAU Hall of Fame in 1994. After trying out for the Phoenix Mercury and the now-defunct Detroit Shock, she is currently the head women’s basketball coach at Irvine Valley College in California.

Dangler was brought on in 1983 to become the head coach for Yavapai baseball and a faculty member. Three brief years later, he led the Roughriders to the JUCO World Series in 1986 and placed third. However, the team returned to the World Series in 1993 and this time around, they got it done and won the championship. Dangler received Coach of the Year honors in that same season.

In both 1986 and 1993, he was named Region 1 Coach of the Year. Dave is only one of two coaches in NJCAA history to take two different programs to the JUCO World Series. He coached eight NJCAA All-Americans and had 44 players selected in the MLB draft. 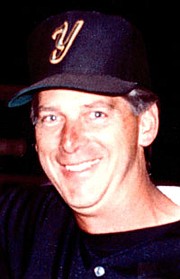