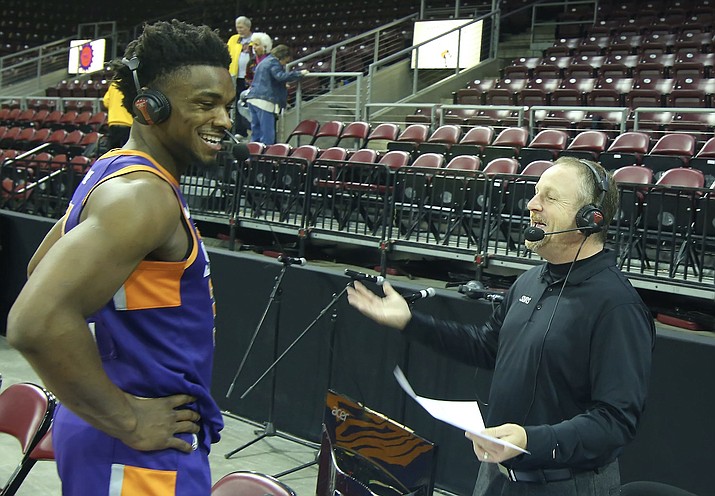 Northern Arizona Suns play-by-play broadcaster Jon Bloom talks with Retin Obasohan a season ago. Bloom is getting his own call-up to the NBA, taking a larger role with the Phoenix Suns' broadcast team. He could potentially call 25 games on the radio this season for the Suns in place of Hall of Fame broadcaster Al McCoy, who enters his 48th season calling Phoenix games in 2019-2020. (NAZ Suns/Courtesy)

FLAGSTAFF — Jon Bloom, voice of the Northern Arizona Suns since the club’s inaugural season in 2016-17, is getting a call-up of his own.

Bloom is scheduled to potentially call 25 games on the radio for the Phoenix Suns this season, starting Nov. 23-24 when the club plays back-to-back road games with Minnesota and Denver.

“It’s another step for me, obviously. I loved every minute of my time in Prescott Valley. It didn’t matter what platform we were on, our crew was absolutely fantastic,” Bloom told the Courier in a phone interview Friday afternoon.

“Calling games is what I love to do. No matter the level. When I get to put the headset on and describe games to fans, that’s what I love,” Bloom added.

The San Francisco native said he’s just hoping to keep the seat warm for Hall of Fame broadcaster Al McCoy, who is entering his 48th season calling games for the Suns.

McCoy, who began bringing Suns fans play-by-play action on the radio in 1972, said that although he’s going to still call the majority of the games for Phoenix this season, there are a few road trips he’ll miss.

“Jon is a true professional, and certainly has worked at his craft for many, many years,” McCoy told the Courier in a phone interview Friday. “He is certainly in a great position to expand his role with our broadcast.”

The NBA G League’s club in Prescott Valley has seen its fair share of players and coaches get their chance at the next level, and now Bloom can be added to that list.

Bloom, a one-time public address announcer and play-by-play broadcaster for the Arizona Cardinals, has spent more than a decade as the Phoenix Suns postgame radio host for Arizona Sports 98.7 FM, and that work will continue when he’s not wearing the headset describing the game to thousands of Suns fans this season.

Byrd and Kuyper will team up for the first time Nov. 9 when the Suns host the Agua Caliente Clippers at the Findlay Toyota Center.

Byrd has spent the last six years as the producer of the Burns & Gambo Show on 98.7 FM.

Byrd has spent time in Prescott Valley before, where he was on the broadcast team for the Arizona Sundogs hockey team. He also called Northern Arizona University sporting events from 2005-2017.

Kuyper, a former Arizona State basketball player from 1979-83, joined Bloom on the broadcast at the tail end of last season.