Bears shut out for first time since 2012
Prep Football 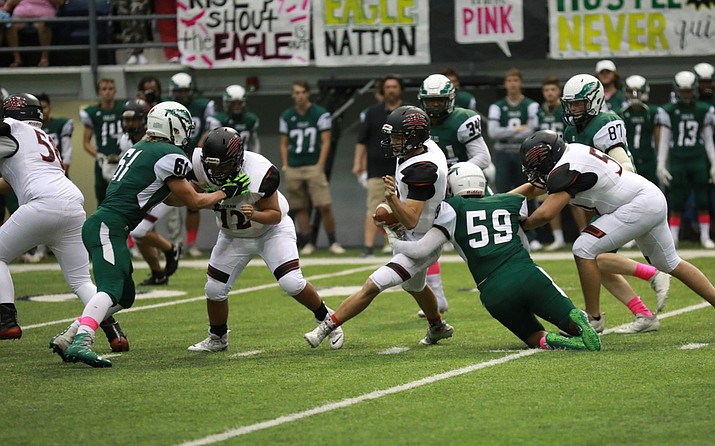 Bradshaw Mountain QB Josh Grant tries to avoid the sack in the team's 20-0 loss to Flagstaff on Friday, Oct. 4, 2019, at the Dome in Flagstaff. (Daily Sun/Courtesy)

Until Friday, Oct. 4, at Walkup Skydome, that’s how long it had been since Bradshaw Mountain’s football team was shut out.

Flagstaff stifled the Bears’ offense the entire evening and relied heavily on its rushing attack to snap a three-game losing streak, notching a 20-0 victory in a Grand Canyon region clash Friday, Oct. 4, at Northern Arizona University.

Bradshaw Mountain lost its second straight contest, dropping its record to 3-4 and 1-2 in region play. The Eagles improved to 3-3 and 1-2.

The last time the Bears got blanked was on Sept. 7, 2012, when they suffered a 56-0 loss at Cactus Shadows in Cave Creek.

Running back Titus King was the lone standout for the visitors, rushing for 78 yards on 14 carries.

Quarterback Josh Grant struggled, as he went 2 for 9 for 7 yards and an interception before being pulled in the third quarter in favor of Moises Hernandez (5 of 11 for 12 yards; 44 yards rushing).

On the first play of the second quarter after a scoreless first, Flagstaff’s Ryan Tagle hauled in a 24-yard TD catch from Weidinger, although the extra point failed following an Eagles penalty.

Down 6-0, Bradshaw Mountain would register back-to-back interceptions, including Alex Cabral’s fourth pick of the campaign deep in Bears territory with 4 minutes left in the second quarter.

However, Bradshaw Mountain couldn’t develop any kind of rhythm offensively, something which also plagued the Bears in the second half.

Grant threw an interception to open the third quarter, but the Bears got the ball back on the very next play from scrimmage when Eagles senior tailback Colby Hollaway fumbled.

At that point, Hernandez replaced Grant for the rest of regulation, and yet Bradshaw Mountain continued to sputter. With 6:52 left in the third quarter, Flagstaff effectively put the game away on Hollaway’s 2-yard TD run for a 13-0 lead.

In the fourth quarter, Flagstaff’s defense held its ground, allowing the Eagles’ offense to grind out the clock. Inside of 6 minutes left, Jaramillo drove the Eagles on a time-consuming 80-yard drive, capped by his 17-yard TD run with 12 seconds remaining to conclude matters.