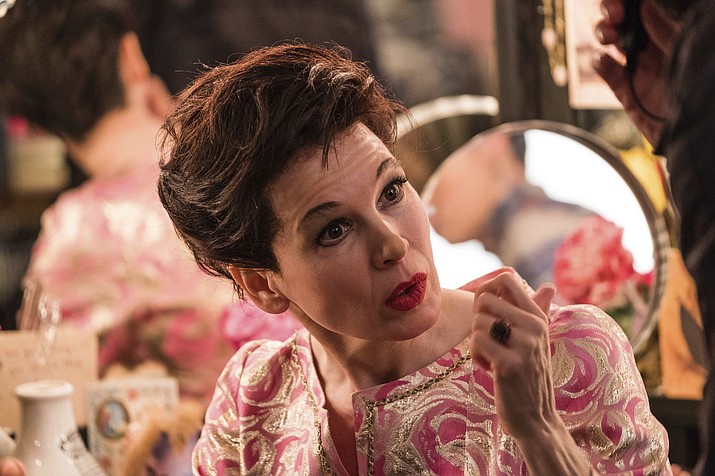 Renée Zellweger is so undeniably perfect as Judy Garland that it almost makes up for the shortcomings of the film around it. "Judy " is itself a fine and imperfect look at some of Garland's last years of life, but it really should have been something transcendent — Zellweger's performance demands it.

Inspired by Peter Quilter's play "End of the Rainbow," ''Judy" drops in on Garland in late 1968 and early 1969, another down moment in the star's turbulent life. Garland at this point is 46 and looks older — a lifetime of pills, smoking, weight loss, weight gain and booze has taken its toll and she has been whittled down to a wisp of a person. She also in the midst of a contentious divorce from producer Sid Luft (Rufus Sewell), who gambled away all her money at the race track, somehow still got the house and is trying to get custody of their two young children, Lorna (Bella Ramsey of "Game of Thrones") and Joey. Liza Minnelli (Gemma-Leah Devereux) at this point is grown and pursuing her own career in showbiz.

Garland's life in the present is painfully unsettled. She is living out of suitcases in hotels and dragging her kids around to be in her low-paying gigs. There is something unspeakably sad about the fact that Garland, despite all of her success, her talent, her fame and over 40 years of giving everything to the performance, still had no place to call home. She is a vaudeville vagrant. Her home is on stage, her family is the audience. And at the moment, she's the "unreliable" and "uninsurable" bad seed that no one in her home country wants to deal with.

It's why she reluctantly signs up for a series of shows in London at the Talk of the Town cabaret. The Brits still idolize her and are willing to pay. For Garland, it's a chance to make enough money to buy a house so she might have some hope of getting custody of her children.

The film cuts between the present moment and the set of "The Wizard of Oz," in which audiences get a crash course on the psychological and emotional stranglehold studio chief Louis B. Mayer (Richard Cordery) had on his 15-year-old employee (played with verve by Darci Shaw).

Working from a screenplay by Tom Edge, director Rupert Goold presents Garland's story lovingly and without judgment. He takes time to show the person behind the pain (and the headlines), something that barely anyone in her circle seemed to offer her at the time. But it's Zellweger who makes her come alive again with a clear-eyed, deeply emphatic and captivating portrayal that elegantly balances her profound sadness and vulnerability with that gloriously bawdy and dark sense of humor. Zellweger's voice might not be an exact match of Garland's, but the soul and spirit that she brings along with her lovely approximation will certainly elicit more than a few goosebumps.

Some of the best moments are her on stage, or just about to go out convinced that she can barely speak let alone sing only to turn it on for the crowd seconds later. But there's also a touching sequence with a few of her fans who give her a much-needed night of normalcy and also gives a nod to her importance in the LGBTQ community.

The film leaves something to be desired with basic facts, however. It assumes much, glosses over some and seems to skip over crucial developments — like how Mickey Deans (Finn Wittrock) went from random admirer to fifth husband. It also ends six months before her death. In other words, it's up to the viewer to fill in the blanks (or find a good biography to help afterward).

But all that melts away when Zellweger is there belting her heart out.

"Judy," a Roadside Attractions release, is rated PG-13 by the Motion Picture Association of America for "substance abuse, thematic content, some strong language, and smoking." Running time: 118 minutes. Two and a half stars out of four.

MPAA Definition of PG-13: Parents strongly cautioned. Some material may be inappropriate for children under 13.