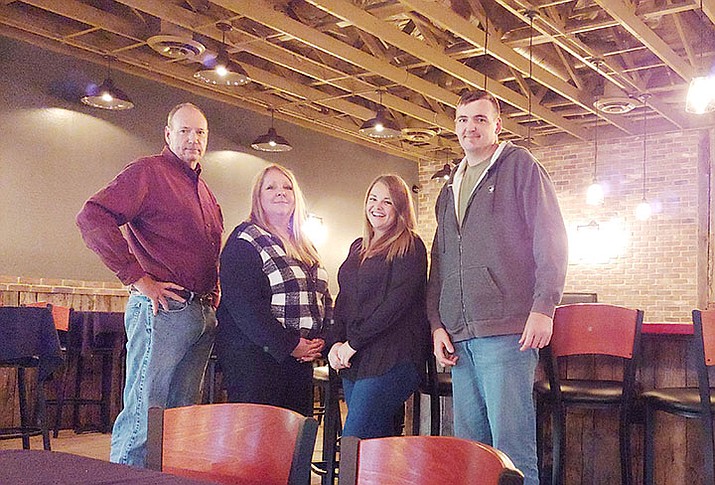 From left, Richard Ross, Gretchen Ross, Mercy Clark and Kyle Ross will be opening the new Iron Cask restaurant where the former Native Grill & Wings had been located in the Crossroads shopping center south of Highway 69 in Prescott Valley. (Doug Cook/Courier)

Richard Ross was retired for about a year before he got antsy.

Born and raised in New Jersey, Ross and his family moved to Gilbert two decades ago so he could accept a job in the Phoenix area. For the past three years, the Rosses kept a part-time home in Prescott Valley, although Richard knew he eventually wanted to move here permanently.

So, in March, Ross and his wife, Gretchen, left Gilbert for good and relocated to Prescott Valley.

All was well, until recently.

“I was still retired, but I was getting a little bored,” Ross said. “We needed a hobby to keep us busy and to help supplement with retirement income.”

While restaurant ownership and general management may not sound like a hobby, Ross seems all-in on Iron Cask, a 130-seat sit-down restaurant with outdoor seating that he’s opening in early January at the former Native Grill & Wings, 5533 E. Highway 69, in the Crossroads Center in Prescott Valley.

Ross’ 26-year-old son, Kyle Ross, who was born in Mesa, will be the executive chef at the new restaurant. The Rosses have made cosmetic improvements to the space to “make the environment more warm and friendly,” Richard said, over the past 1-1/2 months.

“I was out visiting my son, and I saw the place,” said Richard of Native Grill, which lasted only eight months. “I had thought about it for a while. I had called about the business once, and it was hard to pass up the deal [to lease the building]. It’s a brand-new facility. It’s fully furnished.”

For 35 years, Ross worked for various companies in distribution logistics, which involved warehouse management. He’s no stranger to the business world, and he knows how to create a niche market.

Richard says Iron Cask will offer something not currently available in Prescott Valley – a gastropub with modern American fare that’s made to order. He plans to hire 15 to 20 employees, who will be a combination of full- and part-time workers.

Food will be prepared from farm to table with fresh local ingredients, he added. Expect a fine-dining experience, whether it’s the entrees, the experience or the customer service.

On Nov. 21, the Prescott Valley Town Council approved a new Series 12 restaurant liquor license for Iron Cask. Sixteen craft beers from Arizona and nationally, craft cocktails and a wine list featuring local and international wines will be available at the opening. Richard said he eventually wants to offer 32 craft beers.

Craft cocktails will be mixed at the bar with juices, simple syrups and other fresh ingredients.

“It is becoming a trend and we’re bringing it to PV,” bar manager Mercy Clark said of the craft-cocktail movement. “I’m looking forward to being creative.”

Clark and co-owner/general manager Gretchen Ross will play crucial roles in this venture alongside Richard and Kyle, who graduated from culinary school and earned a bachelor’s degree in hospitality from Farleigh Dickinson University in Teaneck, New Jersey.

“I’m very passionate about this; it’s very exciting to work as a family and do something creative,” said Gretchen, who had previously worked in corporate retail. “Hopefully, it does phenomenal.”

“My [cooking] technique will be the same here, but I’ll expand to the West Coast and Southern comfort food,” Kyle said. “I am bringing my East Coast flare to Prescott Valley.”