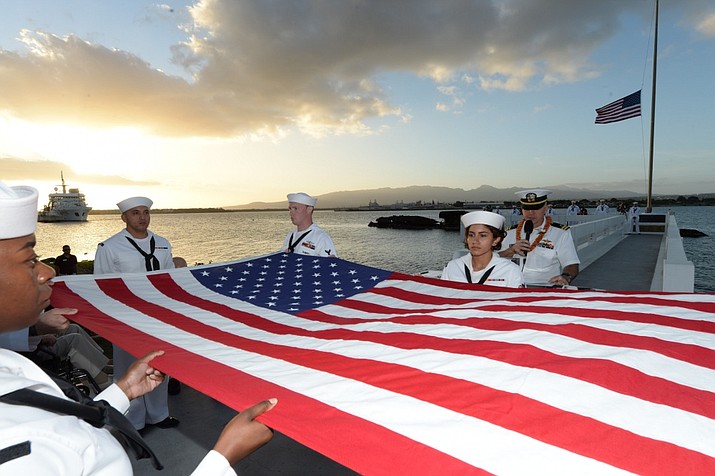 Each year on Dec. 7, Pearl Harbor Survivors, veterans, and visitors from all over the world come together to honor and remember the 2,403 service members and civilians who were killed during the Japanese attack on Pearl Harbor on December 7, 1941. A further 1,178 people were injured in the attack, which permanently sank two U.S. Navy battleships (the USS Arizona and the USS Utah) and destroyed 188 aircraft. (U.S. Navy photo by Mass Communication Specialist 1st Class Randi Brown)

The Pride of Prescott Marching Band’s trip to Pearl Harbor in Hawaii is one Bill Williamson endorses as a means to teach a history that should never be forgotten.

He, too, sees it as a culturally-inspired field trip that will enrich students in a way only travel can do.

“It’s a great experience … even if they just were going to Hawaii,” said Williamson, 85, the son of a Pearl Harbor survivor who is president of the Prescott-based national chapter of the Sons and Daughters of Pearl Harbor Survivors. “It will be a lifetime memory.”

Williamson was one of some 4,000 people from around the globe to attend the National Pearl Harbor Remembrance Day commemorating the 75th anniversary of the attack that initiated the United States official involvement in World War II.

On Dec. 7, 1941, the retired physicist and University of Toledo professor was an 8-year-old boy who intended to invite a friend to join in the movies after he finished Sunday school.

Instead, Williamson Jr. ended up a first-hand witness to the Japanese bombing of the Pacific fleet docked in Pearl Harbor. Williamson’s father and namesake was an engineering petty officer for the USS Pennsylvania, a battleship that on that day was in dry dock.

Williamson’s attendance at the 75th anniversary was a memorable occasion; he recalls that he gave a short presentation about his recollections of those events.

In preparation for the students’ upcoming trip, Williamson suggested they surf the Internet to read some of the backstory on the Pearl Harbor attacks so that they can appreciate the enormity of the event and why it remains such hallowed ground. While there, he advised each and every one to embrace every moment so that it makes an indelible mark on their lives.

Only through such participation can they then “pass on the story of Pearl Harbor,” he said.

If Williamson could make one recommendation to the students, chaperones and trip organizers it would be to assure that they visit the “Punchbowl Cemetery,” officially known as the National Memorial Cemetery of the Pacific. Millions visit the military cemetery that honors fallen veterans each year; it is considered one of Hawaii’s most popular tourist attractions.

Then he said he hopes they tour the island, even romp in the surf.

“I hope they enjoy it,” Williamson concluded.