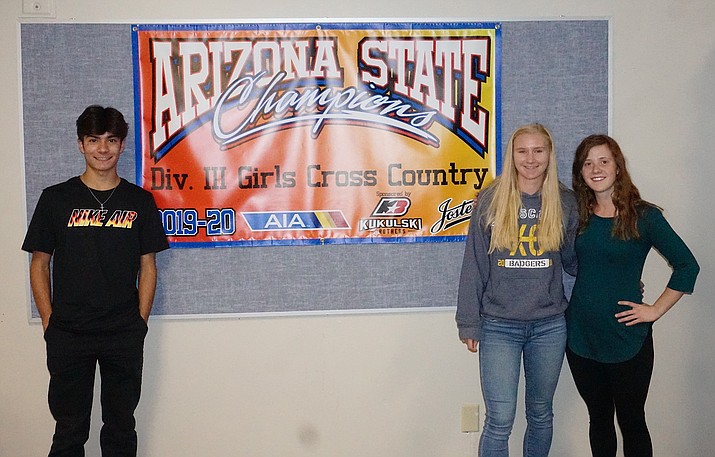 PRESCOTT — Prescott cross-country has always been a formidable and well-respected program but this past season, the team’s hard work finally paid off.

Coming into the season, the Badgers were projected to be one of the top teams in the 4A conference. After posting a strong performance at sectionals, the Badgers qualified for the state meet on Nov. 16 where they etched their names into the history books.

Head coach Cylinda Bray said due to McCarter’s unfortunate fall, the boys’ performance felt a bit unfinished. All in all, she said this was still the Badgers’ best season in her tenure at Prescott.

“For the most part, whenever we set out to do a meet this year, we were going mainly against DI schools and we were beating DI schools on both sides,” Bray said. “Both teams were ranked in the whole state so if you put all divisions together, the boys were ranked seventh in state and the girls were ranked ninth … If you’re ranked against some of the biggest schools, like some of the 6A schools down in the valley, I feel like we have a solid program that is getting a name for themselves for sure.”

McMahon said this season’s success was a long time coming because most of the girls have been together for years.

“The girls team had a few seasons with each other before this year, so we really wanted the state championship and really wanted to do well this year. And the fact that we were able to do that was really special,” McMahon said. “It was a good team to be a part of. Everyone is good quality people.”

Boys senior runner Alec Almendarez said that he originally wasn’t even going to be in cross-country but was pushed by his father to join the team. After spending time with the team, he said the sport and camaraderie quickly grew on him and is excited for what’s to come next.

“It was really fun to do it and I’m sad that it’s over but there’s plenty more to come in college and all that. So I’d say it’s pretty cool,” Almendarez said.

After the state meet, the Badgers competed at the Nike South West Cross Regional on Saturday, Nov. 23, in Casa Grande. The race is not sanctioned by the AIA but features the best teams from Arizona, Colorado, New Mexico and Utah.

The course was very muddy due to three days of rain prior to the event. However, both sides recorded respectable performances during the medium school races.

Makenna Bray and McMahon competed in a separate championship race for a chance to qualify for the Nike National meet. The 28-team race had five of the top 30 teams in the nation competing.

“I feel like this season was very special because we got to wrap up high school with a state championship,” Makenna Bray said. “So for me, that was just like the icing on the cake for the last four years.”