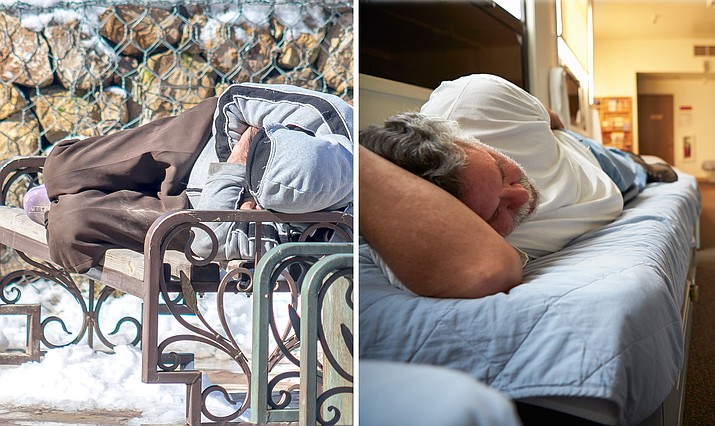 The Quad City Interfaith Council helped revive the effort to care for the homeless in the Prescott area. (Courtesy)

The Salvation Army is again this winter housing the “Operation Deep Freeze” program.

For five nights in November, prior to Thanksgiving, Salvation Army Capt. Sean O’Brien said the emergency winter shelter served 130 homeless men and women, between 20 and 28 each night; the eight women were housed at the Prescott Area Shelter Services home.

The winter shelter effort started through the Coalition of Compassion and Justice about a decade ago. Funding issues and space forced it to close down about five years later.

The Quad City Interfaith Council, a consortium of churches, civic organizations and non-profit agencies serving the homeless, including the Salvation Army, the Coalition for Compassion and Justice and the Gospel Rescue Mission, stepped in to revive the effort. They saw this shelter effort as a ministry to the community’s most vulnerable.

“The local congregations of churches throughout the quad city area have stepped up to save lives,” said Richard Haddad, who serves on the council’s funding committee. “I have been so impressed with the outreach efforts of so many of these congregations to feed the hungry, lift the feeble knees and give shelter to the homeless. And they do it all on shoestring budgets.”

Though the city now has several non-profit agencies offering shelter services, as well as transitional and public/private permanent housing programs for the homeless, including veterans, there remain those who refuse conventional help until conditions become so severe they have no choice.

The Salvation Army for the past five years has volunteered to be the home base for the winter shelter program, committing its staff to work alongside Quad City Interfaith Council volunteers and others to operate the program. Non-profit agency and homeless advocates often visit so they can offer additional resources to the guests.

Located on South Montezuma Street, the Salvation Army opens the doors for the winter shelter when the temperature is 32 degrees or below, the area experiences two consecutive days of rain or there is least two inches of snow on the ground, explained the new Salvation Army Capt. Sean O’Brien.

The shelter opens at 6 p.m. for a meal for both men and women; the women then are transported to sleep at the 19-bed Prescott Area Shelter Services downtown shelter program. PASS offers cots to the “Operation Deep Freeze” guests in the front room of the family-style home.

CCJ also operates a year-round emergency shelter on Madison Avenue for men, women and their pets. Unlike Operation Deep Freeze, CCJ does not have a sobriety policy for its clients.

As collaborative agencies, however, CCJ Executive Director Jessi Hans said the goal is to ensure no one without a home freezes to death in the cold.

“We are just honored to do this because we don’t want anyone to freeze,” Norris said. “We’re here to help anyone in need.”

With the impending weather forecast, O’Brien expects the shelter will be open for up to 10 days in a row. Operation Deep Freeze typically opens for a few nights per week from as early as November to as late as early March. The nightly cost for this operation is $363, he said.

“I think it’s a valuable program,” O’Brien said. “I hate to think about people being in sub-32 degree weather when it’s snowing or raining. I don’t think anybody wants to be out in that, and I’m glad we’re able to provide some way to get people out of that weather.”

To do so, though, is not an inexpensive proposition, O’Brien and other homeless advocates explain.

Not for the first time, funding for Operation Deep Freeze has dwindled. The council and shelter supporters are seeking donors – big and small – to help raise about $12,000 to help cover expenses. The cost for 60 days of shelter last winter was just under $30,000, O’Brien said.

The Salvation Army appreciates the council and community’s ongoing financial and hands-on support, particularly volunteers willing to assist with meals, O’Brien said. Regardless, though, O’Brien said his agency is committed to the program such that it intends to make up any financial shortfalls this season.

A GoFundMe page was started to share the mission – it includes a video - and generate additional dollars to ensure its operation now and in the future. The donations for this operation are funneled through CCJ and are tax-deductible.

“What better way for those of us who go home to a warm bed to truly show our thanks than by making a donation to efforts like these,” Haddad said. “Even the smallest donation can make such a difference when the nights are cold and there is nowhere to go.”

Anyone wishing to make a tax-deductible donation to “Operation Deep Freeze” can do so through the GoFundMe website: gofundme.com/ODFPrescott.

Any churches, civic groups or families interested in helping prepare a meal for “Operation Deep Freeze” is asked to contact Jeff Gavroy at 928-778-0150 between 9 a.m. and 4:30 p.m.