Combating congestion at Viewpoint Drive and 89A
Council approves widening Viewpoint at interchange, but will it help? 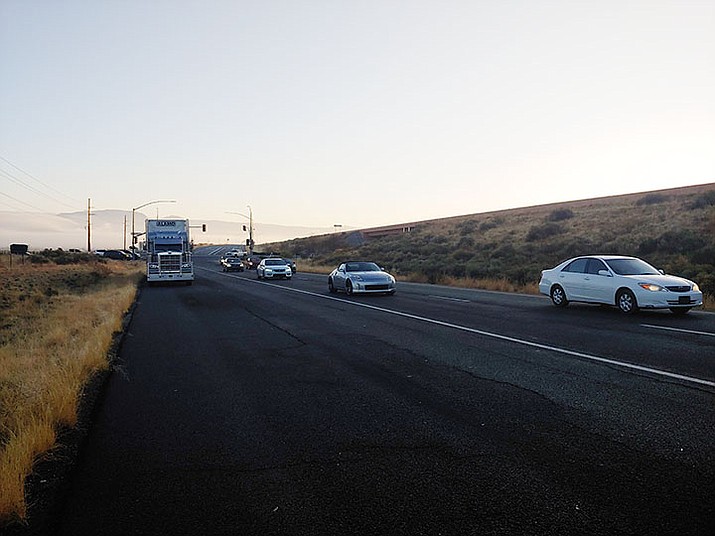 Traffic at the Highway 89A and Viewpoint Drive interchange is heaviest in the early morning hours, as seen here, and in the late afternoons. Prescott Valley’s Town Council on Thursday, Nov. 22, approved a lane widening at Viewpoint Drive northbound at this interchange, which will be coupled with a new southbound lane in the coming months to try to reduce congestion. (Doug Cook/Courier)

Is the cart coming before the horse with all of the development being proposed for Prescott Valley?

In other words, can the town’s infrastructure keep pace with the number of homes and businesses that may be built here in the next five to 10 years?

On Thursday, Nov. 21, Prescott Valley’s Town Council took a baby step, unanimously approving the widening of Viewpoint Drive at the Highway 89A intersection to two northbound lanes to try alleviating traffic congestion in the early morning and late afternoon hours. Adding another southbound lane on Viewpoint is in the works, too.

The Viewpoint Drive northbound widening will extend from the 89A interchange to Pronghorn Ranch Parkway. Also approved was widening nearby Coyote Springs Road to three lanes, which should divert a portion of the traffic on the east side of the Pronghorn Ranch subdivision away from Viewpoint.

Mayor Kell Palguta said Nov. 22 that there will be a designated turn lane at Antelope Meadows Drive and Pronghorn Ranch Parkway, too.

Council’s final piece in this latest round of widening work will be expanding a stretch of Glassford Hill Road for a free-flow right lane exiting 89A from the west. This will allow drivers to merge onto Glassford Hill Road traveling southbound without stopping at the signal there.

This is a nearly $1 million project, which Prescott-based CLM Earthmovers has received approval to undertake in the coming months. Prescott Valley Public Works Director Norm Davis said the town and Yavapai County are splitting the cost.

However, Davis said the town’s share will come from development impact fees.

“Growth pays for growth,” he added. “That’s how the town pays for road projects.”

• Announced that a crosswalk has been approved on Lakeshore Drive for Liberty Traditional School students to cross before and after school hours. Two vehicle-pedestrian accidents involving schoolchildren within the past year prompted the town to take action.

• Approved the Antelope Park subdivision, which calls for 189 homes on the southwest boundary with the Pronghorn Ranch subdivision. Palguta said the developer has two years to decide whether to build there.

• Approved a restaurant liquor license for Iron Cask, a new restaurant slated to open in early 2020 at the former Native Grill & Wings, 5533 E. Highway 69, in the Crossroads shopping center south of the highway.

• Announced that the year-long repaving and culvert work at the intersection of Spouse and Viewpoint drives has concluded, with a ribbon cutting scheduled for Thursday, Dec. 12. Asphalt work will be completed on Viewpoint Drive in the weeks leading up to the event.

• Heard from a couple of Pronghorn Ranch residents who are concerned about Thursday’s approval of the Antelope Park subdivision, which would likely create more traffic congestion. Antelope Park would not have any apartments, which brought some relief from the residents in attendance.

• Approved the final development plan for Unit 13A of the Granville subdivision, which consists of 58 lots on about 19 acres south of 89A and west of Glassford Hill Road.

• Heard from Bradshaw Mountain High School Principal Kort Miner, who announced that senior Caitlynn Neal has been named Student of the Month for November. The Optimist Club presented Neal with a certificate and a glass paperweight for her achievement.

Neal, a star pitcher for the Bradshaw Mountain softball team, has a 4.24 GPA and recently received a full-ride scholarship to compete for the University of Nebraska in Lincoln.

This past month, Neal led Team USA’s 17U squad to a gold medal at the age group’s inaugural Pan Am Games in Colombia. One of 14 girls from around the country on the team, Neal pitched a perfect game, a no-hitter, and a shutout in the tournament en route to MVP honors.

Bradshaw Mountain running back Titus King earned Student of the Month honors in October for his prowess as a standout scholar athlete as well.