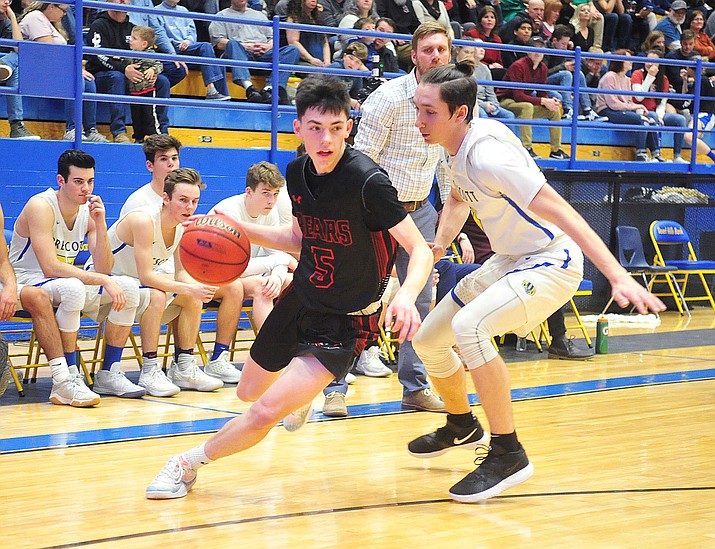 Bradshaw Mountains's Tripp Nestor drives to the baseline as the Bears traveled to play the Prescott Badgers Tuesday, January 8, 2019 in Prescott. (Les Stukenberg/Courier)

PRESCOTT VALLEY — It’s been nearly four years since the Bradshaw Mountain boys basketball team played a state playoff game, but talk to any of the Bears players or coaches this season, and they feel that’s going to change rather quickly.

Maybe even as soon as this coming February.

“We are expecting big things this year. Our vision is making it pretty far in state, hopefully we can win a title. We need to keep playing as a team and improve from last year,” senior point guard Tripp Nester said last week before a scrimmage against neighboring Chino Valley, adding that he wants to improve his game this season and become a leader.

“Hopefully [I can] help my team win a region title,” he said.

Second-year head coach Blair Hillig turned the program around a season ago, finishing over .500 with a 13-11 record a year after the club won just two games.

“Being it my second year, it’s kind of nice to add a little bit of my flavor in what we’re trying to do,” Hillig said. “It’s exciting, we kind of broke through last year, and have a quite a few returners from that team. It’s exciting moving forward.”

The last time Bradshaw Mountain made the state playoffs came during Gilbert Ibarra’s senior season in 2015-16 when the Bears finished 16-8 overall, but lost to Cortez 62-55 in the first round of the state tournament.

Today, Ibarra is six games into his senior season at Embry-Riddle, playing NAIA hoops for the Eagles and his alma mater, Bradshaw Mountain, is aiming for a Grand Canyon region title.

“Our goal right now is to win region. That’s our main goal, so keep working hard and make it happen,” junior guard Carter John said, adding the team has focused on offense a bit more this preseason.

“We tried to input our offense a bit more, because last year we struggled on that. … Our defense is really strong,” John said.

Hillig, entering his 12th year in the program after working under former coaches Doug Beilfuss and Matt Simpson for a decade, thinks winning the region title will be tough because it’s a balanced league.

“Sometimes you need a break here and a break there, but I really do believe if we take care of business and play the way we’re capable of playing and stay together, we have a chance to be there,” Hillig said.

After losing guard Parker Bennett and forward David Massis to graduation last year, everyone else returns to the Bears roster this season.

“We lost two guys from last year … they’ll be hard to replace, but the guys we bring back, there’s some good talent there. We have some size. I like our size,” Hillig said. “Our strength is at guard, we have four to five guys who can get after it. Our depth is one of our strengths.”

Hillig believes the Bears can be successful this season due to the team chemistry the club has developed already in preseason, which has carried over success a year ago.

“These guys are really close, and I think that’s big. I’ve seen some pretty talented teams that underachieve, and sometimes it’s hard to pinpoint why. But usually it’s something with team chemistry. I really like our chemistry. … They really do get along,” Hillig said.